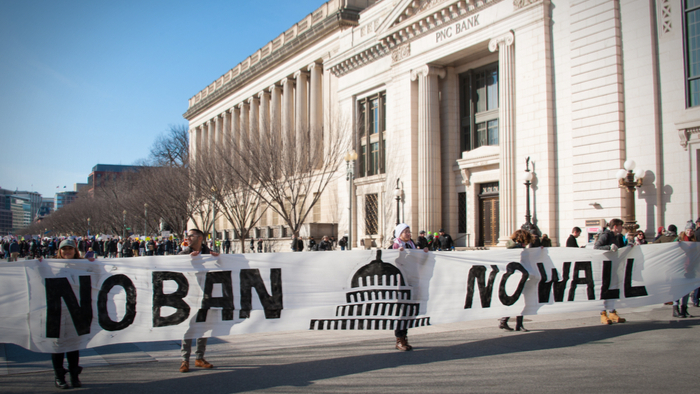 • Muzaffar Chishti and Jessica Bolter unpack the first two years of the Trump administration’s travel ban, which has seen many iterations.

• How cna funders work to improve immigration policy to benfit the U.S. and immigrants?

Though the Trump administration’s travel ban was born in controversy and resulted in a flurry of public protests and legal challenges that reshaped one of the President’s first executive orders, two years on the much-contested policy has demonstrated a widespread impact on the admission of foreigners from the banned countries, while also reshaping U.S. security vetting procedures and the refugee resettlement process.

It was not an accident that the travel ban, issued precisely one week into the presidency of Donald Trump on January 27, 2017, was one of his first actions. Immigration has been central to the Trump campaign and presidency, as the recently ended, 35-day partial federal government shutdown over funding for a border wall underscored.

The stated rationale for the travel ban was that the U.S. government needed a more rigorous review of the information it received from foreign countries to properly vet foreigners seeking admission. While undertaking this 90-day review, the entry of immigrants and visitors from seven designated countries (all Muslim-majority: Iran, Iraq, Libya, Somalia, Sudan, Syria, and Yemen) was suspended. The initial executive order sought to pause refugee resettlement to conduct a similar, 120-day review of the entire refugee admissions program, and indefinitely suspend the admission of Syrian refugees. The order, which did not outline any specific exceptions, and the ensuing chaos at airports spurred more than 40 federal court challenges. As a result of those lawsuits, eight federal courts granted injunctions or temporarily restrained parts of the travel ban, preventing individuals and groups of people—such as those with valid visas and arriving refugees—from being denied entry. Then on February 3, 2017, a U.S. district court in Washington blocked the enforcement of all provisions of the executive order relating to the travel ban.

With the original travel ban stalled in the courts, the administration issued a revised version on March 6, 2017. It still suspended entry of immigrants and visitors from six Muslim-majority countries—Iraq was removed—and paused refugee admissions for 120 days. However, it outlined specific exceptions for groups such as legal permanent residents, dual nationals of banned countries, and refugees already formally scheduled to travel. A federal court enjoined the executive order before it went into effect, but the Supreme Court in June 2017 allowed it to go forward for those foreign nationals lacking “bona fide” ties to the United States.

The third and final iteration of the travel ban, issued on September 24, 2017 via presidential proclamation, narrowed the classes of visitors blocked from eight designated countries: Chad, Iran, Libya, North Korea, Somalia, Syria, Venezuela, and Yemen, though Chad was removed from the list in April 2018. It also set up a waiver process, whereby otherwise blocked foreign nationals could enter the United States if they established that denying their entry would cause undue hardship, and their entry would not pose a national-security or public-safety threat and would be in the U.S. national interest. Lawsuits again challenged this version of the travel ban, reaching the Supreme Court for resolution. The justices were presented with three arguments against the travel ban: the President had not made a sufficient finding that banning the entry of these nationalities would be detrimental to the national interests, the proclamation unlawfully discriminated based on nationality, and it unconstitutionally discriminated based on religion. On June 26, 2018, the Supreme Court upheld the third version of the travel ban as both statutorily and constitutionally permissible.

Read the full article about the Trump Administration’s travel ban by Muzaffar Chishti and Jessica Bolter at Migration Policy Institute.

If you are interested in Immigrants and Refugees, please see these relevant events, training, conferences or volunteering opportunities the Giving Compass team recommends.