Philanthropy in Pursuit of Democracy: A Discussion Between Rob Reich and Jeff Raikes 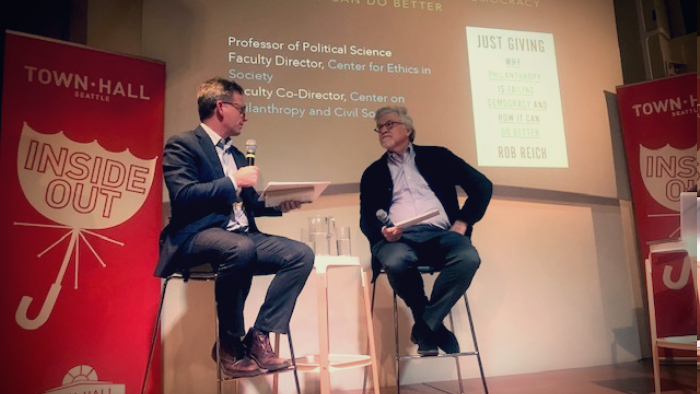 In Just Giving: Why Philanthropy Is Failing Democracy and How It Can Do Better, political scientist Rob Reich says how we think about philanthropy, from tax codes that benefit the wealthy to foundation accountability, needs an overhaul.

Reich recently brought his unapologetic critique to Seattle, which is the home to several big-name philanthropists, for an hour-plus discussion with Jeff Raikes, co-founder of the Raikes Foundation and Giving Compass, as part of the Town Hall Seattle series. The pair engaged in a lively conversation about philanthropy, policy, and how we can all promote a fair democracy.

Here’s a closer look at their conversation.

A Closer Look at the Field of Philanthropy

Reich says current policies allow foundations and philanthropists to operate with little transparency or accountability, exacerbating power dynamics in society as a whole.

“There was a worry back 100 years ago, that what a foundation represents is an exercise of power by the wealthy,” Reich said. “An exercise that is basically unaccountable. No one can put a foundation out of business, no one stands for an election.” Of the nearly 100,000 foundations in the U.S., Reich notes, only about 10 percent have websites. Without a public-facing platform, it makes it more difficult for grant-seekers to apply for funding and therefore leaves the power in the hands of foundations to choose their grantees.

While many of us view philanthropy as a positive, Reich said we should avoid celebrating the practice without also considering its flaws. Raikes agreed there should be a healthy balance of appreciation and scrutiny, but reminded Reich that complete transparency would mean foundations would need to share negative grantee evaluations which could significantly harm their reputations and affect fundraising.

According to Reich, individuals whose income is $1 million or more give primarily in the following areas: health, education, and arts and culture (specifically to museums, universities, and hospitals); there is less focus on giving to the poor.

Like other high-net worth donors, education is a focus for Raikes, however, he approaches it with a systems change strategy and works closely with those affected.

“We believe it’s important to be a patient philanthropist, to have community-based solutions that come from collaboration, and to think about the systems,” Raikes said.

Reich’s critique of philanthropy doesn’t center solely on foundations. He points to the U.S. tax incentive for charitable giving as “problematic because [tax deductions] systematically help rich people.” For example, if two individuals make equal donations to a nonprofit, the donor in the wealthier tax bracket receives a greater rate of subsidy making it “cheaper to be virtuous the wealthier you are.” There is one upside: The social benefit to the public from the two donations remains the same.

Raikes agreed that the tax deductibility can lead to a plutocratic bias and welcomed a larger debate on Reich’s proposed solutions of a capped tax credit or elimination of the tax incentive. However, Raikes warned that getting rid of the tax incentive or reducing it could decrease the rate of charitable giving on the whole, something he believes is already happening as a result of the 2017 tax reform. He noted that of all the give aways in the U.S. tax code, perhaps charitable giving was not the one to pick on, in part because giving is sensitive to tax policy.

He also addressed motivation: “I am uncomfortable with the idea that wealthy people will be encouraged by the reduction of the tax incentive to give more wealth to kids and less wealth invested back into society.”

How Do We Move Forward in Philanthropy to Ensure We Are Pursuing Our Democratic Ideals?

While they didn’t agree on every topic, the professor and the philanthropist found commonalities between two concepts … tenure and catalytic philanthropy.

Describing academic tenure as an opportunity for “long-time horizon, experimental research that you are not likely to see in the marketplace or in democratic agencies,” Reich noted that this evidence-based, truth-seeking work can lead to greater social benefit and be adopted by the government after a thesis has been proven out.

Raikes’ approach to philanthropy, catalytic philanthropy, is similar in that it can take risks and have longer time horizons to identify the structural challenges in systems that fall in between public and private action.

For example, philanthropy can bridge a gap when public sector term limits impact a project. Raikes also identified profit constraints that the private sector is under, explaining that philanthropy can take on a “risk capital” role in bringing an idea to fruition.

The night ended with consensus that both philanthropists and academics can become “discovery agents” in pursuit of advancing society, by leveraging their vehicles of privilege and power to do greater good and to do it well.