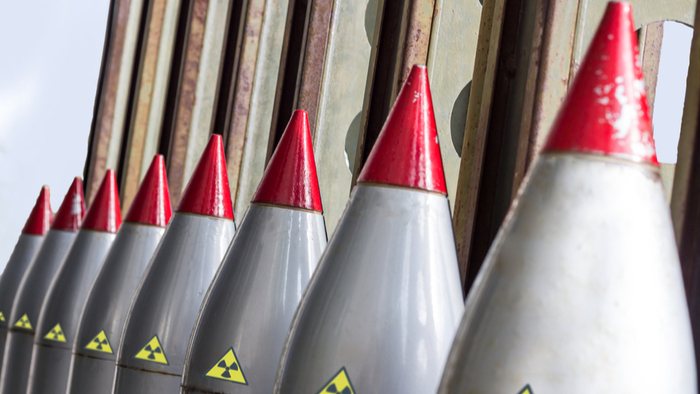 Part three of a three-part series. Read part one and part two.

As a child growing up in Washington, D.C. in the late 1970s and early 1980s, Carrick Pierce was acutely aware of the global arms race. The nuclear threat left him terrified some nights, but he certainly wasn’t alone in his fear. During this period, a global anti-nuclear movement was happening. In Europe and in the U.S., activists marched against both nuclear weapons and nuclear power. In 1982, one million people protested in New York City demanding an end to the arms race.

The movement — which Pierce likens to today’s global warming activism — was effective. Politicians came together and a series of treaties, primarily between the U.S. and the Soviet Union, were created. In 1991, the Soviet Union collapsed.

“That created a pretty significant danger because now you had a gigantic arsenal that really didn’t have the infrastructure, the capacity, the personnel, [or] the financing behind it to ensure its safety,” Pierce said.

In response, The Cooperative Threat Reduction Program (better known as the Nunn-Lugar Program) was created based on the Soviet Threat Reduction Act of 1991 (authored and co-sponsored by U.S. Senators Sam Nunn and Richard Luger). The main objective was to address the weapons arsenal in former Soviet states. In 2001, Nunn and philanthropist Ted Turner founded the nonprofit organization Nuclear Threat Initiative (NTI).

Despite the existence of roughly 14,000 nuclear weapons today — and regular news alerts about missile testing in North Korea and Iran’s enrichment breach — Pierce says the sense of urgency about nuclear threats has dissipated.

“The Cold War ended, but the threat actually increased,” Pierce said. “There are more countries now with nuclear weapons [and] they’re less secure. We have nine nations with nuclear arsenals. That’s a worse situation than even when we were at the height of the Cold War.”

It’s this collection of events that have influenced Pierce to become a staunch supporter of nuclear threat reduction efforts.

Like many donors, Pierce began his philanthropic journey by supporting organizations that addressed an issue he was passionate about. He provided support to NTI, but eventually wanted to go beyond writing a check. With guidance from NTI’s team, Pierce connected with N Square, a network of individuals who are working to end the nuclear threat.

Each year, N Square convenes a cohort to prototype solutions to different problems and provides a budget and resources. Pierce was a recent participant.

“It was great to see a cross-section of groups, verticals, ages, and vocations show that they were concerned, that they wanted to do something,” Pierce said. “This was a gathering of similarly-motivated people.”

This collaborative approach is already producing early results. Pierce’s working group developed a website called Datayo that allows experts to contribute and post their monitoring intelligence. The project has been picked up by One Earth Future Fund.

“The idea behind it is to create an open-source egalitarian portal where anybody can go and see what’s going on,” Pierce said. “[It takes] the intelligence monopoly away from the major nations who can control policy.”

Incremental progress on smaller projects is encouraging, but Pierce admits that it’s a difficult issue to measure and monitor. He sees a gap between the experts in the field and policymakers who can drive change.

“It comes down to getting more influencers who can continue to [start] the dialogue or maintain the dialogue and influence … policymakers,” he said. “That’s the ultimate formula and I think we just need to keep banging on that.”

Despite the work being done on this issue, no one has identified a winning strategy yet. Pierce says that’s exactly why the N Square approach works. By bringing people with diverse backgrounds together on a range of efforts, there is a stronger likelihood for success. That’s where donors who want to take a hands-on approach can bring value.

Learn: Find out who has [nuclear weapons], where they’re located and how they’re secured. Pierce also suggests learning about national nuclear weapon policies and the risks associated with accidents or malactors getting a hold of the technology.

Take Action: Pierce recommends several ways to get involved from supporting organizations like N Square, NTI, and Global Zero to sharing dialogue among family and friends to “hounding policymakers.”