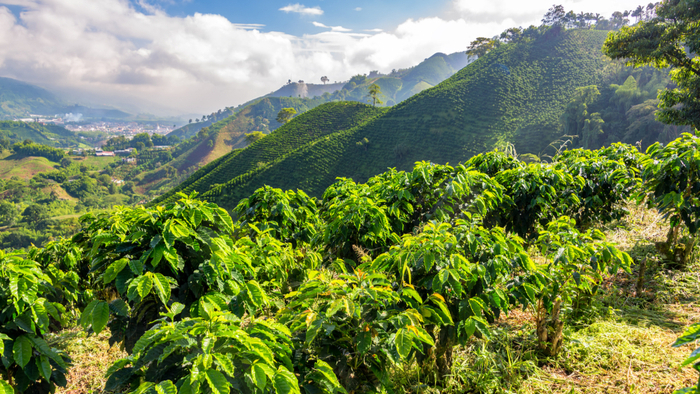 Coffee trees are acutely sensitive to small changes in the weather. Too much sun or too little, too much rain or too little, can play havoc with the flowering and ripening cycle of the coffee cherry, which harbors the developing bean. Temperature is equally critical. The trees do best with warm spring-like days and cool nights, an important reason why the crop only flourishes in a narrow band of elevations in the tropics where conditions are just right. But as global warming progresses, the sweet spot where it can be grown is moving steadily up mountain slopes.

The Colombian mountain region, where coffee is grown, is warming by 0.3 degrees Celsius (0.5 degrees Fahrenheit) per decade, according to a study published in April by coffee agronomist Peter Baker and a team of scientists. The number of hours of sunlight also has declined by 19 percent since the middle of the last century due to increasing cloud cover, and there is no longer enough sun to sustain high levels of coffee production in some areas, the researchers reported. Precipitation extremes are more common, as is the spread of insect and fungal diseases — plagues driven in part by generally warmer, wetter weather.

Indeed, Colombia’s increasingly volatile growing conditions pose the biggest long-term threat to the nation’s small coffee growers, scientists say. Of Colombia’s half-a-million coffee farms, 95 percent are smaller than 12 acres. The small size of Colombia’s mom and pop coffee plantations has allowed the quality and consistency of the coffee to remain high, a major selling point. But most farms remain nonmechanized and are labor intensive, putting Colombia at a disadvantage against other countries with more efficient production systems.’

Some growers at lower elevations have ripped out their under-performing trees,  instead using the land grow high-value crops like avocado and coca leaf, the source of cocaine, which remains the country’s leading agricultural money earner. (Coffee is second.) Meanwhile, in the south of the country, virgin high mountain forests where temperatures are cool are being felled to make way for new coffee plantations.

For large plantations, economic stressors are manageable. Many are currently diversifying their crops to better weather the years when the coffee harvest is poor. But for a smallholder living on the edge of financial solvency, a single bad year poses an existential threat. Some growers have implemented stopgap measures like installing rain-fed water tanks to irrigate their land during drought.

But even these modest steps are beyond the means of many small growers. “You can’t adapt to climate change when you are in poverty,” Eise explained. “And climate change exacerbates the stress of poverty. It’s a catch-22.”

While land planted in coffee in Colombia has shrunk by a fifth due to decreasing global prices, coffee production has remained roughly the same since the 1990s, due to increased efficiencies in the production process, such as planting more trees per acre; biological controls for insect pests; and other agronomic innovations. Gaitan says he is confident that further technological developments can help Colombia — and the world — keep pace with future threats.

Colombia is not the only country where the coffee economy is threatened by climate change: “Climate change will reduce the global area suitable for coffee by about 50 percent across emission scenarios,” according to a report published in the journal Climatic Change in 2015.

The biggest need is for better science to be conducted at the local level to adapt coffee to climate change on a country-by-country basis, as Colombia is doing.  Unfortunately, many of the smaller farmers whose families have cultivated the beloved bean for generations will face the greatest pressure.

“Any negative shocks — a disease outbreak, a drought, low market prices — are going to disproportionately affect the people who have the least ability to absorb them,” says Hanna Neuschwander, communications director of World Coffee Research. “Over the next 50 years you are going to see a trend toward consolidation where only the most efficient producers can stay in the game.”

This article is part of our Climate Justice collection. Learn more about climate justice, or read the full article about Colombian coffee farmers by Richard Schiffer at Yale Environment 360.