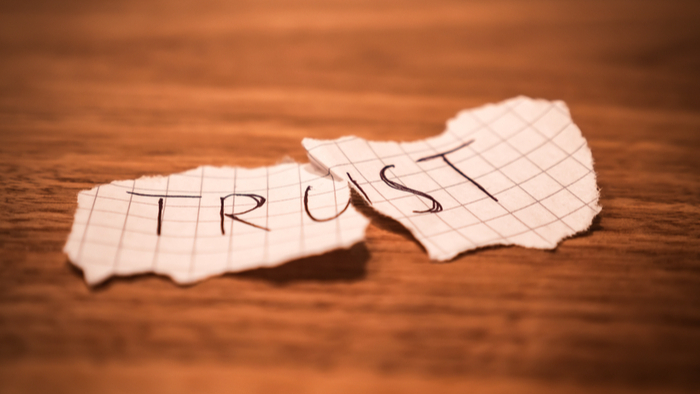 • Lee Rainie, Scott Keeter, and Andrew Perrin report that Americans have little trust in the government and their fellow Americans, and see this a major national problem.

• How can funders work to rebuild trust in America? How can your community be brought together to build trust?

• Learn about strengthening democracy through trust.

Trust is an essential elixir for public life and neighborly relations, and when Americans think about trust these days, they worry. Two-thirds of adults think other Americans have little or no confidence in the federal government. Majorities believe the public’s confidence in the U.S. government and in each other is shrinking, and most believe a shortage of trust in government and in other citizens makes it harder to solve some of the nation’s key problems.

As a result, many think it is necessary to clean up the trust environment: 68% say it is very important to repair the public’s level of confidence in the federal government, and 58% say the same about improving confidence in fellow Americans.

Moreover, some see fading trust as a sign of cultural sickness and national decline. Some also tie it to what they perceive to be increased loneliness and excessive individualism. About half of Americans (49%) link the decline in interpersonal trust to a belief that people are not as reliable as they used to be. Many ascribe shrinking trust to a political culture they believe is broken and spawns suspicion, even cynicism, about the ability of others to distinguish fact from fiction.

In a comment typical of the views expressed by many people of different political leanings, ages and educational backgrounds, one participant in a new Pew Research Center survey said: “Many people no longer think the federal government can actually be a force for good or change in their lives. This kind of apathy and disengagement will lead to an even worse and less representative government.” Another addressed the issue of fading interpersonal trust: “As a democracy founded on the principle of E Pluribus Unum, the fact that we are divided and can’t trust sound facts means we have lost our confidence in each other.”