Jeff and Tricia Raikes On Making an Impact With Giving Compass 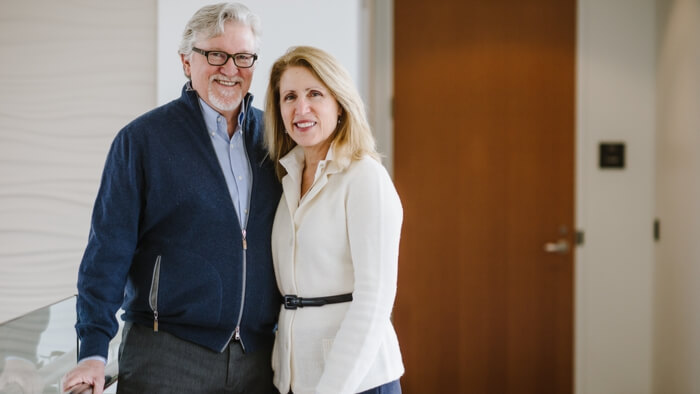 Jeff and Tricia Raikes are no strangers to rolling up their sleeves to tackle difficult issues.

The couple rose through the ranks at Microsoft. Tricia was employee #75 and when she left the company in 1987, she was director of creative services and marketing. Jeff started as employee No. 100 and when he left the company as president of the business division in 2008, he went on to be CEO of the Bill & Melinda Gates Foundation.

Together, they run their own Raikes Foundation and devote many hours and resources to addressing some of the great social challenges of the time. Through all of their philanthropic work, they’ve also become passionate about informed giving in order to have the most impact and effect change.

In pursuit of this passion, Jeff and Tricia worked with other Microsoft alumni to create Giving Compass.

They recently spoke with the Microsoft Alumni Network about their work with the Seattle-based organization and the importance of technology to help individuals research nonprofits and facilitate informed giving.

Tricia:  In addition to my role as co-founder and trustee of the Raikes Foundation and passionate advocate for young people, I serve on the Stanford University Graduate School of Education Advisory Council and VPUE (Vice Provost of Undergraduate Education) Kitchen Cabinet, the board of the Jeffrey S. Raikes School of Computer Science and Management at the University of Nebraska, as well as on the Advisory Board for the Beecher’s Foundation. I am also engaged in our various business enterprises including Alderbrook Resort & Spa on Hood Canal.

Jeff: I wear a number of hats — co-founder and trustee of the Raikes Foundation, President of the Board of Trustees at Stanford University, board member of Costco, and trustee of several other enterprises. We also own or are significant shareholders in a number of business enterprises, including our family farm in Nebraska.

How did Giving Compass come about?

Giving Compass is a first-of-its-kind search engine for philanthropy, designed to drive more resources to more good. On the platform, donors can find ways to learn about issues, connect with volunteer opportunities and events, and give to issue funds, organizations, and projects. Giving Compass was launched in partnership with others in the field of philanthropy to put in one place the best of what we know about how to give with impact. The platform offers opportunities to learn about issues and causes from top quality content partners, connect to volunteer opportunities and events, and take action by giving to an issue fund, project, or organization.

Finish this statement: We stand with this organization because …

We believe that we can accelerate the pace of progress on pressing issues by helping donors learn how and where to give with impact.

As a nation, we are at the beginning of what is expected to be the most significant transfer of wealth in our nation’s history (likely by a factor of eight to ten), and much of that wealth (the most recent estimate is about $20 trillion) will be given to nonprofits. That is a huge opportunity for society, to make faster, deeper progress on issues and in communities. At the same time, most donors (85%) say they want to give with impact, but only a third do any research at all on the organizations they give to, and fewer than 10% ever compare organizations. We believe that technology can help bridge this gap. Our goal is to create true behavior change by aggregating the world’s information to make it easier to give well. We all need to do our part to be informed and intentional givers, so that the most effective organizations can access the capital they need to get the work done.

Giving Compass organizes the world’s information to make it easier to give well.

Has that mission shifted since it started? If so how and why?

No, not really. We are blending the knowledge of philanthropy with the best of technology in order to accomplish our goals.

How has the organization evolved?

Jeff: Giving Compass launched in beta mode in June of 2017, so it’s a relatively young enterprise. Yet, it is already exceeding the traffic and engagement benchmarks in this sector. We have a new CEO [Ben Klasky] as of February and are focused on the sustainability of the enterprise over the long term.

Why are you involved?

Jeff: During my transition from business to philanthropy, when I left Microsoft and became the CEO of the Bill & Melinda Gates Foundation, I had the opportunity to get what I call my “Ph.D. in Philanthropy.” Tricia and I had access to and opportunities to learn from the very best experts in global development and philanthropy. Still, more than ten years later, we are learning new things every day about how to be effective philanthropists. We want to support other donors who want to give well but find it difficult to access learning resources, networks, and opportunities to increase the impact of their giving. Giving Compass is a key piece of that effort.

Tricia: Americans are generous — as a nation, we give nearly $400 billion to support issues and communities. When people think about philanthropy they often think of the work of professionally-staffed foundations like the Bill & Melinda Gates Foundation or the Ford Foundation. But 80% of that giving is directed by individual donors, not the large foundations.

There are many pressing issues and causes that need to be addressed urgently with long-term solutions and philanthropic support. We want more donors to have access to high quality resources and advice to guide their generosity.

Q: What are your responsibilities with the organization?

Jeff: Tricia and I helped launch Giving Compass and are now on the advisory board along with many Microsoft Alumni.  At our foundation, we lead an initiative that focuses on increasing the impact of individual generosity and Giving Compass is one piece of that work. We have appointed Stephanie Gillis as a strategic advisor to Giving Compass from the Raikes Foundation to provide expertise and ensure that partnerships and strategy are vetted through the lens of measuring and promoting impact.

The more we explored the challenges facing donors, the more we found others who also recognized this opportunity, including members of the academic and philanthropic sector, many of whom became Giving Compass board members. Giving Compass is using the power of cloud technology to make a big bet on shaping the evolution of giving in the era of digital transformation.

Over the last several months, I have spent time traveling the country to speak on behalf of the Raikes Foundation about the way that Giving Compass is really breaking new ground and I’m having a lot of fun connecting to philanthropists and organizations in a new way. The message is really simple: let’s work together to learn, connect and take action.

Q: How are Microsoft Alumni (in addition to yourselves) involved in Giving Compass?

Tricia: This is truly a collective effort among a variety of Microsoft alumni. Besides Jeff and me, who are both Microsoft alums, there are a handful of other important roles held by Microsoft alumni. Luis Salazar worked closely with Jeff at Microsoft as part of the founding team of Office 365, originally called Office Live and led the Giving Compass team as the first CEO.  Now, Luis continues to lead the technology innovation for Giving Compass from his post as co-founder of Giving Tech Labs, supported by leading technologists including Microsoft Alumni Joel Rosenberger and Frank McKeown. In addition to Luis, the Giving Compass leadership team includes Paul Shoemaker, Microsoft alum and creator of Social Venture Partners International along with board members Bill Shaughnessy and  Kathleen Hebert.

Q: How did the magic of those connections drive the mission of Giving Compass?

Jeff: After I left the Gates Foundation, I reconnected with Luis Salazar who had at that point, become a serial entrepreneur running software startups. We share a love for technology and the positive impact it can have in society acting as a powerful catalyst for change.

We started to explore how to get the philanthropy community informed and connected for great impact. We focused on a mission to organize the world’s information to make it easier to give well. That is a daunting enterprise to tackle.

Our cloud platform aggregates content and we have some very basic machine learning, trained by experts and partners to catalog it and refine it. Some information is aggregated in real time from multiple sources via APIs from selected partners including subject matter expert organizations, foundations, and individuals. Paul Shoemaker, another MS alum who is also one of the leading experts on impact philanthropy and an all-around good guy, came on board and helped our team shape the early work. Paul has been instrumental in guiding our approach to vetting content for impact, which is one of the key differences between Giving Compass and other online efforts. The challenge in front of us is large, but the potential benefits are inspiring, and we are willing to stay for the long run until we make it work. It’s maybe our background at Microsoft that created our stubborn, laser-focus on building and iterating.

Q: What does it look like when you volunteer your time?

Tricia: Jeff and I work to make an impact in a lot of different ways — from advocating for large-scale initiatives like youth homelessness and race & equality to local outreach with specific organizations. Back in Jeff’s hometown of Ashland, Nebraska (population 2,200!), we made a grant to help build a new community center which now serves as the heartbeat for gatherings in the town.  We have helped many young people complete their post-secondary education through College Success Foundation where I served on the board for many years.   We also take time to mentor young people and are very active on Stanford’s campus where Jeff is the chair of the Board of Trustees and I serve on the Advisory Board of the Graduate School of Education.   We have volunteered for our local United Way where we chaired a successful annual campaign. And of course, we give back through initiatives like Giving Compass and other Raikes Foundation efforts where we aim to address and ultimately solve big problems. We do this by making investments in systems change and seek to positively impact generations of young people to come.

A version of this interview originally appeared on Microsoft Alumni Network.