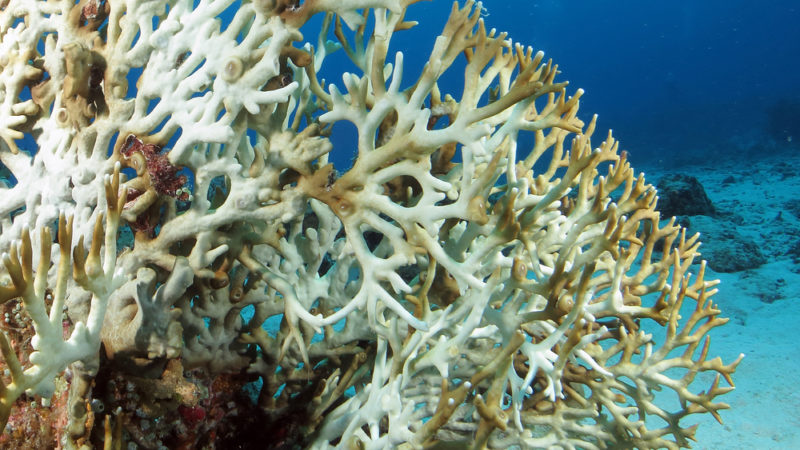 · How can funders use this information to guide efforts to protect reefs and wildlife?

· read about coral bleaching and the effects of climate change.

As coordinator of the National Oceanic and Atmospheric Administration’s Coral Reef Watch, an initiative that analyzes satellite data to measure heat stress on coral reefs, marine scientist Mark Eakin watched an unprecedented three-year global bleaching crisis begin to unfold in 2014. To read Eakin and his coauthors’ recently published chronology of those years is to feel like you’ve stumbled into a dystopian science fiction novel about a fatal pandemic as it slowly dawns on the protagonist just how dire the situation is and how far and fast it’s spreading.

Climate change from the burning of fossil fuels has steadily raised ocean temperatures. But from 2014 to 2017, big spikes in ocean heat levels stressed the world’s coral reefs before temperatures finally fell and an intense El Niño weather pattern ended. During that time, corals in the world’s tropical oceans bleached en masse – expelling the symbiotic algae that provide them with color and nutrition. If temperatures cool, coral polyps can recover. But as the heat persisted, untold hundreds of millions of corals died, documented in a drumbeat of depressing dispatches from the South Pacific accompanied by images of widespread destruction.

“I tried to alert people when satellites showed how bad it was getting,” said Eakin. “There were those horrible days when I would start getting reports emailed in with photos showing how bad it was, and my heart would just sink.”

The worldwide bleaching episode is now considered the longest and most destructive of the three that have occurred since 1998. NOAA estimates that three-quarters of global reefs hit the first “alert 1” level of heat stress, where bleaching is a major risk, while nearly a third suffered “alert 2” levels of heat that are likely to kill them. Half the corals on the 2,300km-long (1,400 mile-long) Great Barrier Reef – about a billion of them – were bleached to death between 2015 and 2017.