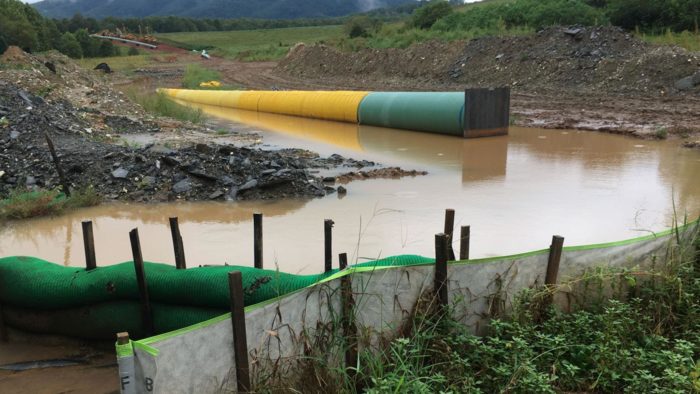 When Crystal Cavalier-Keck heard in 2018 that an energy developer was planning to build a natural-gas pipeline near her hometown of Mebane, North Carolina, she was immediately concerned. Cavalier-Keck, who is a member of the Occaneechi Band of the Saponi Nation, knew about the violence against Indigenous women that often takes place when so-called “man camps” are assembled in areas where pipeline projects cut through Native communities.

“I immediately thought about the man camps it would bring, and I was thinking we need to alert the people,” said Cavalier-Keck, who at the time was serving on the leadership council of the state-recognized tribe.

She began researching the project, which is known as the Mountain Valley Pipeline Southgate Extension. The planned line, she found, would carry natural gas roughly 75 miles from Pittsylvania County, Virginia, to a delivery point in Alamance County, North Carolina, ending roughly five miles from her home.

The 42-inch-diameter pipeline would receive gas from the Mountain Valley mainline, a 300-mile line that originates in the gas-rich shales of West Virginia. Designed to transport 2 billion cubic feet of natural gas per day, the multi-billion-dollar mainline has been under construction since 2018 and is nearly complete, according to Mountain Valley Pipeline, LLC, a joint venture that includes Equitrans Midstream Corp.

MVP’s developers have amassed more than 300 violations of environmental laws, and — with the blessing of the Federal Energy Regulatory Commission, or FERC — have forced landowners along the pipeline to sell chunks of their property.

When Cavalier-Keck learned the developers were planning to condemn properties in North Carolina so they could build on the ancestral lands of the Occaneechi, the Monacan Indian Nation and other tribes, she decided to take action. In late 2018, she resigned from her position on the tribal council so she could speak out against the project without impeding the tribe’s efforts to consult with the government on the project.

Read the full article about the Mountain Valley Pipeline and Indigenous land by Mark Armao at Grist.