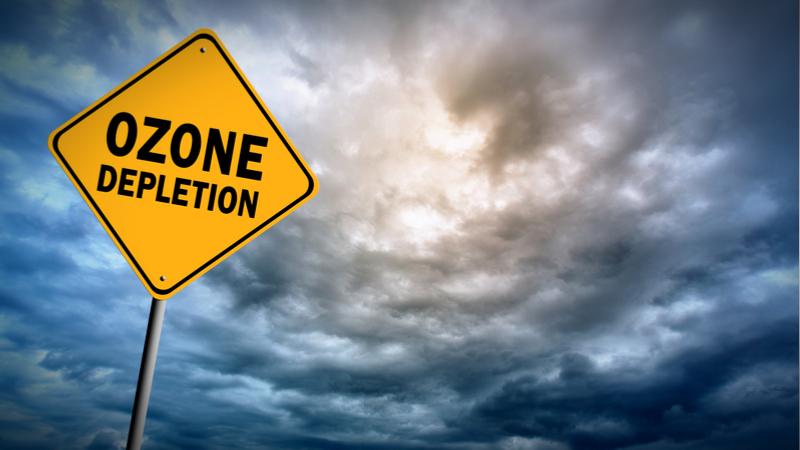 As Earth Day approaches, it’s an appropriate time to remember environmental successes we’ve had. One such victory was the Montreal Protocol, the first major international environmental agreement of its kind, in 1987. With the goal of stopping ozone depletion by banning certain ozone-destroying chemicals from commercial use, the protocol was unprecedented. 30 years later, the original protocol, combined with the amendments, has leveled off the destruction of the ozone hole.

What Does Ozone Do?

In the troposphere, the atmospheric layer extending 6.2 miles above earth, ozone is a form of pollution lowering air quality. It is harmful to humans and vegetation. In the stratosphere, which is the space above the troposphere up to 31 miles above the surface of the earth, ozone provides a vital service. Stratospheric ozone prevents high-energy ultraviolet rays from entering the troposphere. Human activity has interfered with this damaged this shield. Now, there is a hole in the ozone layer that protects us from UVB rays.

What Caused the Ozone Hole?

Chemicals such as chlorofluorocarbon (CFCs), Hydrochlorofluorocarbons (HCFCs), freons, halons which were commonly used as refrigerants, propellants, and solvents before the Montreal Protocol and amendments, catalyze the breakdown of ozone (O3) into oxygen (O2). Because of the wind patterns and low temperatures unique to the South Pole, ozone depletion primarily occurs in one spot over the South Pole. The hole waxes and wanes with the seasons and varies from year to year based on temperature and weather patterns.

Why Do We Care?

The UVB rays that stratospheric ozone blocks are harmful to life on earth. UVB rays are known to cause sunburns, skin cancer, and cataracts in humans. People living under the ozone hole are more susceptible to skin cancer than those protected by the ozone layer.

Ozone depletion became widely known as a health crisis. Particularly, it is a health crisis that impacts fair-skinned humans. Perhaps more importantly, the patent for the harmful CFCs that cause ozone depletion was close to expiration. The company that held the patent was instrumental in pushing the Montreal Protocol forward. This rare alignment of environmental problems and immediate business gains paved the way for this groundbreaking international agreement.

The success of the Montreal Protocol spurred a wave of key followup agreements, including the Copenhagen Amendments in 1992. The original protocol, combined with the amendments, has leveled off the destruction of the ozone hole. The hole stays in approximately the same range as it fluctuates through the seasons each year. Progress made in reducing the hole has been nominal. Still, this is a massive environmental success. Allowing the ozone hole to increase would have cost many lives around the world. By mitigating the damage and allowing the painfully slow recovery to begin, the Montreal Protocol has succeeded in its goal of reducing the harmful effects of ozone depletion.

International efforts like the Kyoto Protocol and, most recently, the Paris agreement have failed to reach similar consensus that the Montreal Protocol enjoyed. It’s important to remember; while we can praise the glowing success of the Montreal Protocol, it achieved no glorious reversal of damaging processes. We are only talking about mitigating the worst possible outcomes.  Skin cancer victims are an ongoing result of the ozone hole, and will be for decades to come.

According to NASA, most climate scientists agree the main cause of global warming trend is the human expansion of the “greenhouse effect.” But many are not so sure about that perspective. Despite our differences, as per this article published by Giving Compass, we do agree that we need more wind and solar energy as fast as possible, and the jobs that go with it. We also agree pollution, caused by many of the same elements that may cause climate change, is a major health concern.

We should not only talk about our climate change disagreements, but we must take action together and we can start with these four recommendations. Find groups of like-minded people contributing money or volunteering to make our environment healthier together. This is one of the most important behaviors we observe from real impact givers.

Keep the meaning of success in mind when talking about failure to come to international agreements addressing environmental issues. The consequences of delaying action or failing to take action on environmental issues can be devastating. Our best course of action is to prevent further destruction in order to mitigate ill-effects.