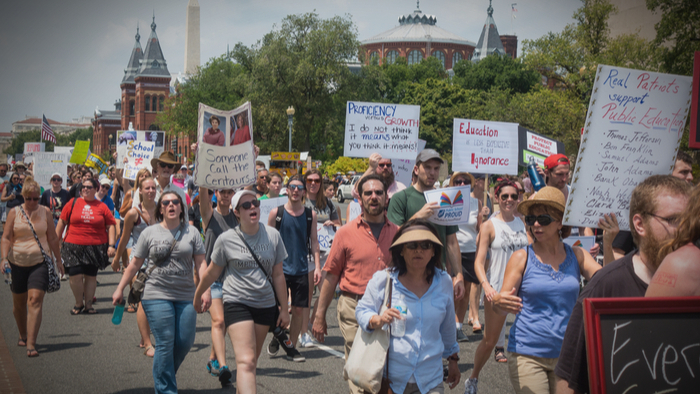 • The Phi Delta Kappa (PDK) International Poll showed that the majority of public school parents are supportive of teachers if they plan more walkouts in the next coming school year.

• What can parents do to show support or get involved to help eliminate challenges for teachers?

• Read more about the teacher strikes and why they happened earlier this year.

With more teacher walkouts possibly on the horizon for this coming school year, new polling results from Phi Delta Kappa (PDK) International show that more than three-fourths of public school parents would stand behind teachers if they went on strike for salary increases.

Two-thirds of those responding to the PDK Poll of the Public’s Attitudes Toward the Public Schools say teachers in their community are paid too low, a response that has been steadily increasing since 1981. But while Americans show broad support for teachers, and more than 60% say they have trust and confidence in public school educators, only a little more than half overall — 54% — say they want their children to teach.

The results line up with a recent report showing declining enrollment in the nation’s teacher education programs. With more efforts to attract young people, especially students of color, into teaching during their high school years, the findings raise the question of how much influence parents have over whether their children choose that path.

Just last month, PDK released early findings from the poll on parents’ and the public’s attitudes regarding school security issues, with leaders opting to release these results early “as a contribution to the public discourse on this critical issue,” according to the survey report.

More than a third of parents saying they don’t believe their children are safe at school, the findings showed, and only about a quarter of the sample of 1,042 adults is in favor of allowing teachers and other school staff members to carry weapons.. But support increases if armed educators participate in about 80 hours of “rigorous training and screening” — about 80 hours of preparation.