Refugee Girls Want to Improve the World: How Can We Help? 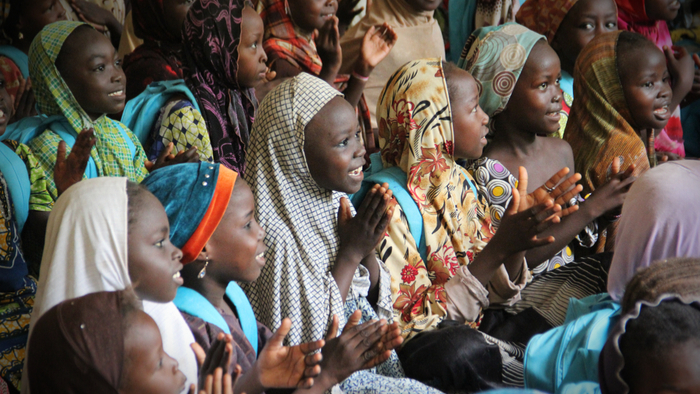 • As this Hechinger Report article highlights, although cultural tides are shifting for gender equity, there’s a lack of educational resources for young female refugees.

• How can funders help open up more opportunities for refugee girls? Which partnerships will help expand schools in areas that attract a high volume of migrants?

A sea of 76 students in bright violet uniforms with pointed white collars confronted Jessica Deng as she stepped into her classroom. The students — all girls in the eighth grade — crowded around worn wooden desks and battered textbooks as she briskly set them to work on a math problem calculating the speed of someone who travels 80 kilometers in 4 hours. The equatorial sun had begun to heat up the September day and burned through the curtainless windows of Deng’s classroom at Bahr El Naam Primary School, a compound of dusty one-story cement rooms lacking air conditioning and electricity in the Kakuma Refugee Camp in Northern Kenya.

Deng is just 21; her students are only a few years younger than she is. Standing tall in a black T-shirt and gray slacks, a braided bun on top of her head, she carries a red pen as she walks up and down the aisles. The girls watch her pass with eager eyes and wave their notebooks for her to correct. Deng is a role model, having both a high school diploma — earned at a boarding school in Nairobi, no less — and a job. She tries to embolden them to dream big.

They do. Some want to be lawyers or doctors. One wants to be a pilot. But for most, the obstacles that stand in the way of achieving these ambitions are insurmountable.

Read the full article about how the world fails in educating refugee girls by Sarah Butrymowicz at The Hechinger Report.

Learning with others and benchmarking are key steps towards becoming an impact giver. If you are interested in giving with impact for Immigrants and Refugees, take a look at these events, galas, conferences and volunteering opportunities to connect with individuals like you.

In addition to learning and connecting with others, taking action is a key step towards becoming an impact giver. If you are interested in giving with impact for Immigrants and Refugees take a look at these Giving Funds, Charitable Organizations or Projects.