The Pros and Cons of Police-Free Schools 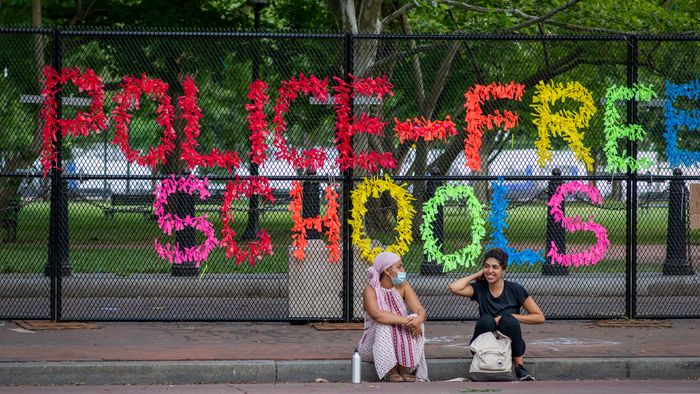 • Mark Keierleber explores the progress and drawbacks of a Minneapolis school district’s move to police-free schools in 2017.

• How might implicit discrimination and systemic racism prevent widespread success of police-free schools? What can we do to explore alternative models to eliminate racism and violence in American schools?

• Read more about the effect of police officers in U.S. schools.

The idea of removing police from schools is getting a fresh look amid the tumult following the death of George Floyd, a Black man from Minneapolis, in police custody in May. Now, as districts from Portland to Milwaukee sever ties with police departments, District 287 offers insight into the promise — and limitations — of such a move.

To exemplify the safety coaches’ success, Superintendent Sandy Lewandowski cites a sharp drop in student arrests, from 65 to 12 in the program’s first year, according to district data. The majority of arrests under the policing model were for low-level offenses like disrupting class. Coaches still call police when violent outbursts spin out of control, but only in 2 percent of their interactions with students, according to district data. In most cases, Lewandowski said, coaches are able to calm tensions.

The coaches, many of whom have years of experience working with special needs students in the district as paraprofessionals, spend their day bouncing between classrooms, interacting with students and responding to trouble. Rather than arresting students for misbehavior, the coaches use “restorative justice,” which relies on mediation to help students express their emotions in a more positive manner.

But in critical ways the atmosphere remains threatening for many. Since officers left campus, only 59 percent of district staff report feeling safe at school, according to a recent educator survey. Just 54 percent said they feel “at least as safe” as they did before the district launched the coach program — and roughly a third reported feeling less safe. In a district where violent outbursts are common, officials acknowledged that educator injuries, including concussions, arising from altercations with students remain a problem. In fact, workers’ compensation claims spiked after coaches replaced officers.

Read the full article about police-free schools by Mark Keierleber at The 74.

If you are interested in Crime and Safety, please see these relevant events, training, conferences or volunteering opportunities the Giving Compass team recommends.