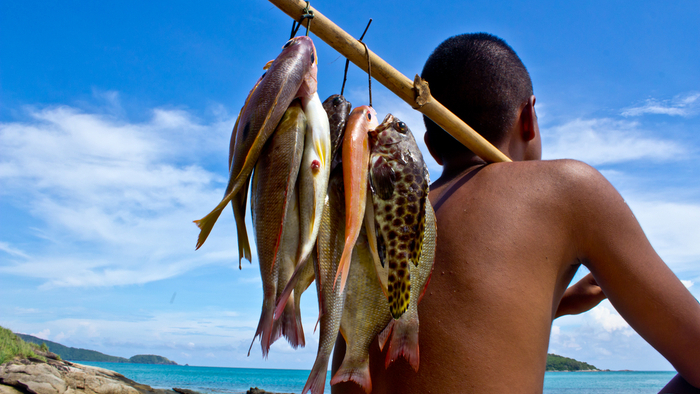 • Research from UCSB reports that countries in the tropics, particularly Northwest African nations, are particularly vulnerable to the loss of fish stocks due to climate change.

• Policymakers need to think about how those countries could be compensated for the loss of fish stocks due to climate change. How can they achieve this?

• Here’s why climate justice means protecting the future of fish.

Fish are on the move, and the world isn’t ready. Ocean warming has driven fish stocks to migrate toward cooler waters as they seek to maintain their optimal temperature range. This poses a problem for many nations that rely on commercial fish species as an integral part of their economy.

The new research in Nature Sustainability also shows that no adequate policy interventions are in place to help mitigate affected countries’ potential losses.

DISAPPEARING FISH STOCKS
The researchers examined international agreements, including the United Nations Convention on the Law of the Sea, explains Kimberly Oremus, a former postdoctoral scholar at the University of California, Santa Barbara’s Bren School of Environmental Science & Management, now an assistant professor at the University of Delaware.

But the researchers found no specific text for what happens when fish leave a country’s Exclusive Economic Zone (EEZ), a zone established to give a country national jurisdiction over a fishery resource. That means countries could be vulnerable to economic losses, she says, and those potential losses could make the fish populations themselves vulnerable as well.

“If you know you are losing a stock, then the short-term incentive is to overfish it,” says coauthor James Salzman, a professor of environmental law at the Bren School. “What have you got to lose? The stock’s going to move anyway.”

The researchers looked at projected changes in the distribution of 779 commercial fish species to estimate the number of species exiting national waters under different carbon emission scenarios up to the year 2100.

Read the full article about disappearing fish stocks in the tropics by Harrison Tasoff at Futurity.