Change the System By Filling In the Middle 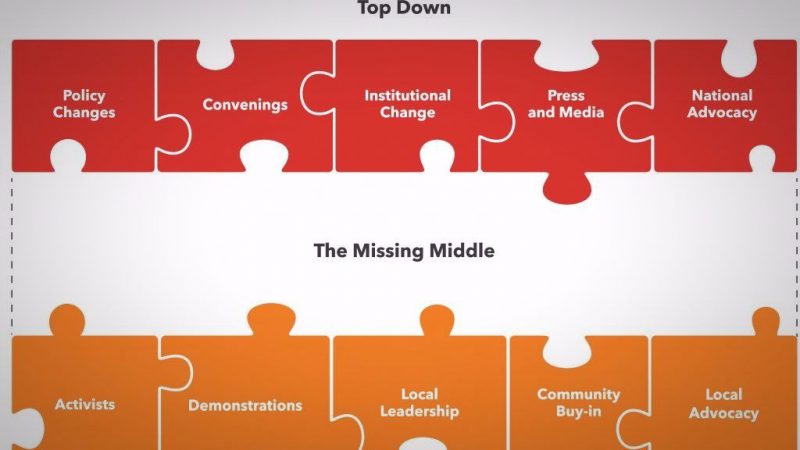 • Geneva Global discusses the concept of the “missing middle,” when larger strategy overshadows the on-the-ground operations, and relates it to systems change.

• Would you have use for a “systems entrepreneur,” as described here — an individual or organization that brings together multiple partners to make sure everything is running as it should?

There’s a theory that middle children often get the least attention from parents — they neither get the focus of the “firsts” that come with being the eldest sibling nor the coddling that can accompany the baby of the family.

I’ve noticed another middle that often gets easily ignored: it’s what I call the “missing middle.” It occurs when the big-picture efforts of those creating new resources, proposing new policies, and championing new partnerships to address an issue don’t mesh with the ground-level work being done by those dealing with the day-to-day realities of life facing those affected.

Given the critical part bridging the ‘missing middle’ in systems development plays, why is it so often overlooked? In large part because it is less appealing, and certainly less rewarding in the short-term.

The more complex, entrenched, and multi-faceted a social problem is, the greater the need to change the underlying systems contributing to the problem. I’ve seen a lot of separate top-down or bottom-up efforts, but often those approaches and efforts aren’t coordinated or connected, leading to this missing middle. And what inevitably happens is that the solutions never take hold; they apply a temporary solution to the problem rather than solving it for good.

This is where systems entrepreneurs — those organizations and individuals who make systems change possible by bringing together disparate disciplines, interests, and stakeholders — play probably their most important role.

Helping ensure all the relevant partners — from government and media to investors and practitioners — are invited to the systems change table is the essential first step. As independent brokers, if you will, systems entrepreneurs make that possible. But then it is crucial that those around the table really understand each other, if their potential synergy is to be realized. The systems entrepreneur plays the role of bridging those gaps.

That’s where the role of a systems entrepreneur becomes vital. As an independent voice who can understand the context behind divergent viewpoints, they are in a position to illuminate everyone’s blind spots and be a bridge between disparate people and opinions …

Read the full article about filling the “missing middle” to change systems by Doug Balfour at Geneva Global.