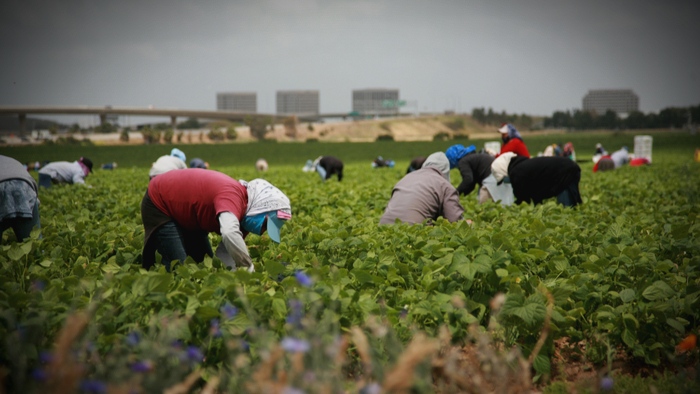 • Migrant workers are risking their lives during COVID-19 because they have very limited financial alternatives or employment protections.

• What other groups don’t have access to safer job options during the pandemic? How can donors raise awareness about the dire state of economic necessity for some workers?

On the outskirts of Rantoul, in east-central Illinois, about 100 migrant farmworkers are living at an old hotel in a sleepy part of town.

Every day at the crack of dawn, Samuel Gomez and the rest of the crew get their temperatures checked on the way out the door. Most workers, donning masks, load onto a big yellow school bus for a 30-minute drive to a large warehouse, where they will spend the day sorting corn coming in on large conveyor belts.

Gomez, who is from Mexico, is one of the lucky few with access to a car, so he drives to work with his dad and sister. He’s been here all summer, starting in the field roguing corn — removing diseased and off-type corn plants to increase the quality of the crop. Since September, he’s been working in the warehouse.

In the U.S., an estimated two to three million farmworkers plant, cultivate and harvest crops each year. Among them are migratory workers, like Gomez, who often leave behind family and friends for months at a time to find work that pays more than what they could earn back home.

The long hours and physical demands make the job risky any year, but the coronavirus pandemic has made it even riskier. Outbreaks across the U.S. linked to farms have some worried about the lack of protections for workers, upon whom the nation relies for food.

“Economic necessity… [is] what it comes down to,” she says. “This is their work and they rely on this work to survive.”

For migratory workers like Samuel Gomez and Josh, Partida says the risk of contracting the coronavirus is heightened — they often travel in large groups, live in congregate housing and are unfamiliar with the local resources available to them.

“There’s been a lot of fear and a lot of uncertainty,” she says. “[They’re] relying on organizations that might be able to assist them as they try to learn how to safeguard themselves.”

Read the full article about migrant workers during COVID-19 by Dana Cronin and Christine Herman at Harvest Public Media.

If you are looking for opportunities to take action and give money to Coronavirus, here are some Giving Funds, Charitable Organizations and Projects aggregated by Giving Compass where you can take immediate action.