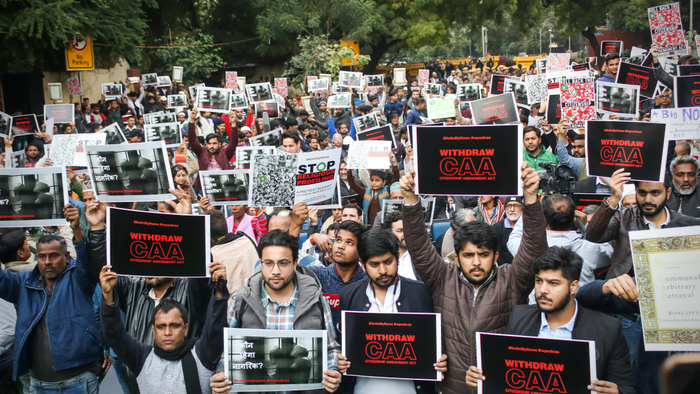 • Sigal Samuel reports that there have been widespread protests in response to India’s new citizenship law have been met with police violence.

• How can funders work to support pro-democracy movements? What support do marginalized Muslim communities in India need?

Protests — and violent police crackdowns on them — are in full swing in cities throughout India, set off by the passage of a controversial new citizenship law. The law, which will fast-track citizenship for migrants from many religious minorities, but not for Muslims, is the latest measure the Indian government has taken to marginalize Muslims.

Police officers swept through a university campus in New Delhi on Sunday, injuring hundreds of student protesters and firing tear gas on those who had run into the library for safety. Videos show police beating students with batons. Some students have been shot, and dozens are hospitalized, though so far none of them have been reported killed.

Observers say the protest at Jamia Millia Islamia University, which has a majority-Muslim student body, began peacefully. But as police officers entered campus by force, some protesters reportedly threw stones at them. Buses and motorcycles were set on fire. Law enforcement stormed past the chaos and into buildings where other students were hiding.

In the northeastern state of Assam, where all residents recently had to provide documents proving they are legal citizens or face the possibility of detention and deportation, police shot four people dead during demonstrations over the past few days.

This wave of protests represents one of the biggest challenges ever to confront Prime Minister Narendra Modi, who has sought to steer India toward a Hindu-nationalist (and anti-Muslim) course. Passing the new legislation, known as the Citizenship Amendment Bill (CAB), has been one of Modi’s main priorities. He claims its purpose is to protect persecuted minorities.

Read the full article about protests over India’s citizenship law by Sigal Samuel at Vox.

India is a complex topic, and others found these selections from the Impact Giving archive from Giving Compass to be good resources.

India is an important topic. Other members found these Giving Funds, Charitable Organizations and Projects aggregated by Giving Compass to be relevant to individuals with a passion for India.