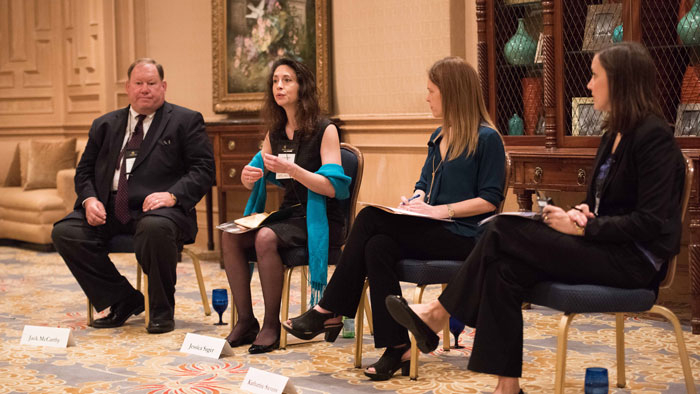 The Philanthropy Roundtable’s 2017 National Forum on K-12 Philanthropy featured a breakout session on how philanthropy can bolster the quality of early education. Below is a recap of the subjects discussed.

That’s how Katharine Stevens of the American Enterprise Institute described the research and policy space within early childcare and education because it’s still new. The research aims to establish quality as opposed to retroactively fixing problems that already exist. She also described the importance of making neural connections during a child’s early years.

Madeleine Bayard of the Rodel Foundation led a discussion with Stevens; Jessica Sager of All Our Kin; and Jack McCarthy of the AppleTree Institute at the 2017 K-12 National Forum.

“A lot of times when we talk about preK it gets confusing because pre (before) kindergarten can mean anything before kindergarten but often what we’re talking about is three and four year-olds in a structured setting like [AppleTree],” said Bayard. “And we were talking before about how childcare has this old connotation of babysitting or warehousing and we’re really trying to change that and make it about quality.”

McCarthy shared the story of Kayla, who was an AppleTree scholar on the autism spectrum, and lived in a homeless shelter with her mother and brother in the Columbia Heights neighborhood of Washington, D.C. She attended the local AppleTree campus where she, along with her brother, was able to receive the special education services she needed to do well in the classroom.

“It was a great experience for Kayla who was on the autism spectrum; she really needed more. And because we have this freedom and we’re a research-based organization, we’ve developed a three-tiered response to intervention model for early childhood education,” said Jack McCarthy, president and CEO of the AppleTree Institute. “You identify what the children’s needs are and the teachers have multiple ways of trying to teach the same lesson or the same concept and the children don’t progress unless they master that. And so it gives teachers a lot of extra tools and extra flexibility and it’s really a competency-based system.”

Sager works with caregivers in Connecticut, many of whom are themselves low-income, and provides them with business resources and licensing so they can deliver high-quality service to families in need of something stable for their children.

“When you have a family whose life is in tremendous disarray, either they’re struggling with homelessness or drug addiction or other challenges. Sometimes, that childcare is the one stable, consistent place where that child and that parent can go every day and know exactly what they’re going to get and be treated with love and respect,” said Sager.

McCarthy sees a viable role for schools like AppleTree that specialize in early education providers to partner with districts and networks that offer high-quality education at the elementary level.

“If we can do this well, we can be a feeder program for other schools … regardless of governance model,” said McCarthy, who reinforced Gov. Jeb Bush’s remarks from the previous night on philanthropy’s role in early education.

“You’re sort of the research and development arm in action,” McCarthy said. “And the things that really are needed are better measurement. We [AppleTree] have developed a number of measurements that provide really useful data for teachers, for instructional leaders, and also for accountability purposes.”

Read about other topics discussed at the forum, and listen to a full audio recording of “The First Five Years,” here.

Early Childhood is an important topic. Other members found these Giving Funds, Charitable Organizations and Projects aggregated by Giving Compass to be relevant to individuals with a passion for Early Childhood.