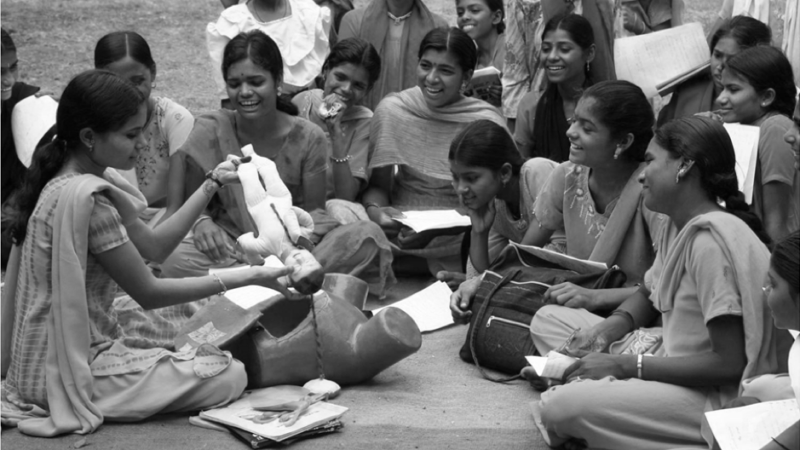 India has been making significant progress in increasing age at marriage for girls1. Despite this,  1.5 million girls are married each year before the age of 182. According to government data, the numbers are particularly skewed in some districts, one of which is the Jalna district of Maharashtra where half the girl population is still married before 183. The ensuing story is based in the Bellary village of Jalna, which hosts a population of 2500 people.

“I am in 11th standard right now and hope to study medicine after I graduate high school”, said Smita4, an adolescent girl from Bellary village in Jalna.

Smita is the youngest child of  Rama and Ramu who are agricultural farmers in this perennially drought prone region of Maharashtra. When Smita had turned 13, her family wanted to marry her to her cousin. Smita overheard these conversations and shared it with her friends, Selvi and Rajshree, at school. The girls had learnt about the adverse effects of child marriage and early pregnancy at the Life Skills Education5 course run by the Institute of Health Management Pachod (IHMP). In order to help Smita, her friends reported the matter to the village Accredited Social Health Activist (ASHA) who was their mentor in the Life Skills Education classes. The ASHA, along with Smita’s friends, went to speak with the parents and reminded them of a true episode from the village where an adolescent had lost her life while giving birth so young. Smita’s parents called off the marriage and allowed her to continue her schooling. This episode reiterates that changing widely accepted norms requires structured intervention.

But more importantly, it makes us wonder if it is common for a group of teenage girls in a village, to confront and encourage families to delay their child’s marriage?

Hardly common. Although it is an expected outcome of the Life Skills Education (LSE) course run by IHMP, that enables girls like Smita, Selvi and Rajshree to mobilize support and stand up against harmful societal norms.

Over the past two decades, IHMP has reached out to ~50,000 adolescent girls through its Life Skills Education (LSE) courses that are after school sessions focused on topics such has self identity, government schemes, communication skills, personal hygiene, sexual and reproductive health, child marriage and early pregnancy. While these are topics covered at school as well, the LSE classes enable adolescent girls to think critically about these issues and form their own opinion.

IHMP conducts its LSE course through  village ASHAs, and enables them with:

In addition to triggering normative change, IHMP’s model also thinks of scale. Each trained ASHA is responsible both for conducting the LSE classes and for forming a Kishori Mandal or  ‘girls club’ of 15-20 members.

The mandals offer girls an opportunity to participate in the community and generate awareness and support on an issue that interests them; thereby giving them a practice terrain for skills and lessons learnt. The kishori mandals are led by girls who demonstrate the leadership skills and  ability to translate their learning for the benefit of the wider community.

Between 2015 and 2017, IHMP has recorded significant improvements in education and marriage related outcomes of girls attending the program, compared to those who are not7. As for the three friends- each one became a peer leader for IHMP’s kishori mandals– inspiring others while  pursuing her own dreams. Rajshree is following the footsetps of her role model- Savitribhai Phule- who was a social reformer and established the first girls’ school in Pune, Maharashtra. Rajshree, enacts the reformer’s biopic in schools to sensitize  others on education and empowerment. Selvi trained with the CSR initiative of a large sewing machine manufacturer in India, and pursues tailoring to support her education and household expenses. Smita is in high school and eager to pursue a degree in medicine. IHMP’s intervention made a transformative contribution to these young lives, by helping them recognize and pursue their dreams.

This is but a glimpse of the community-led change IHMP has been catalyzing in rural Mahrashtra, for decades. Today, IHMP  is advocating for the program’s replication across Maharashtra, so that each girl at the risk of early marriage can be enabled to turn her life around like Smita did!