One spring morning, while shopping at a hardware store in the San Diego area, Malcolm Mitchell received an urgent call.

He soon arrived at the home of a 12 year-old girl whose mother had died that day after suffering through a long, debilitating illness. She had no father, no grandparents, no caregiver at all. She was now alone in the world.

The first responders on the scene breathed easier when they saw Mitchell, who had been a volunteer at the Trauma Intervention Programs (TIP) of San Diego for five years. Maybe he could say something to alleviate the burden of grief. That’s what TIP does: provide “emotional first aid” for people going through the darkest time of their lives.

“Would you like some tea?” the girl asked Mitchell.

There was a presence about her, a composure and assurance that belied her age. After all, she had been a caregiver to her mother, and was used to catering to the needs of others.

The Importance of Being There

“We all have a bias about trying to cure, trying to fix things,” Mitchell says. “But what people really need most is a caring and compassionate presence. And that is our primary role as volunteers.”

TIP was founded in San Diego 32 years ago by a mental health professional named Wayne Fortin, and has since expanded to 14 affiliates across the country, coast to coast, serving over 75 cities, 67 police departments, and 55 fire departments. It is now the largest operator of emergency services volunteer programs in the U.S., and recently won a $25,000 grant from the Starbucks Upstanders Challenge. Spokesperson Rosanna Corral says TIP will use that money to provide resources to the communities they serve, comfort items (crayons, teddy bears) and equipment, such as vests for going into hazardous conditions.

Citizen volunteers, like Mitchell, go through a 50-hour training process, which includes learning about the funeral practices of different religions and ethnicities, going to mortuaries, dealing with child grief, finding out how to handle mass shootings or fires (which are all too common in the Southern California area now), and knowing the best way to deliver resources to those who need it most. 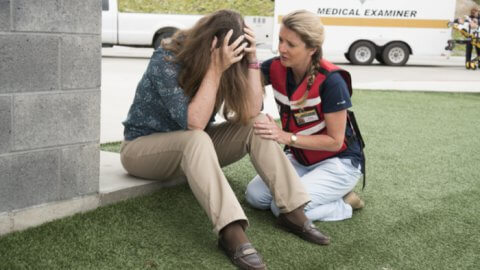 “The coin of the realm is information for people who are grieving,” says Mitchell. “What happened to my loved one? What is going to happen to me? Information is the currency of greatest value. And that’s what we can provide. Let’s see if we can find out when the medical examiner is going to arrive or the date of that emergency room visit. Or call the funeral parlor on behalf of the family, because that is a brutal call to make. But what really matters is just being there for them.”

Indeed, Mitchell saw the impact that TIP had firsthand before he became a volunteer. An employee from the company he owned went home to make a sandwich for her husband at lunchtime one day and discovered he had killed himself with a handgun while she had been at work.

After a 911 call, Mitchell went to the house and saw a volunteer with a TIP badge who comforted his employee, helped her take her medication, arranged a flight for the employee’s son and advocated for her needs with the first responders. But the first question the volunteer asked the woman whose life was irrevocably changed in an instant was: “Would you like some water or some orange juice?”

That volunteer told Mitchell that 90 percent of the process of comforting those going through trauma is showing up. And then listening. And then perhaps asking a simple question so that the person grieving can start to take control of the situation.

The power of a complete stranger choosing to be there and share in their grief has an incredible impact on the clients. They really sense that something profound is going on.

Now, in the home of the recently-orphaned girl, the tables were turned on Mitchell a bit. And it was time for tea.

The two sat for awhile, with Mitchell wondering what was going to happen to this young lady. No matter how many hours of training or years of volunteering, few scenarios can prepare a person for something like this.

Then he noticed a violin case in the room.

Mitchell shared the fact that he knew the instrument a little — and the girl picked up the violin and began to play.

The two traded off, measure for measure, throughout the afternoon, filling the home with music. One of the pieces was the first movement of Sonata in G Minor by Henry Eccles: “Grave.”

At the end of Mitchell’s visit with the girl, he discovered there was someone else watching over her: The family’s landlady, just days before the mother’s passing, had signed paperwork to become the child’s legal guardian.

“It was a couple who had no children of their own, and they just adored her,” says Mitchell. “They had financial resources and stability. And she could not have ended up in a better situation. We were all in tears when she left hand-in-hand with her new mom.”

Music to our ears.