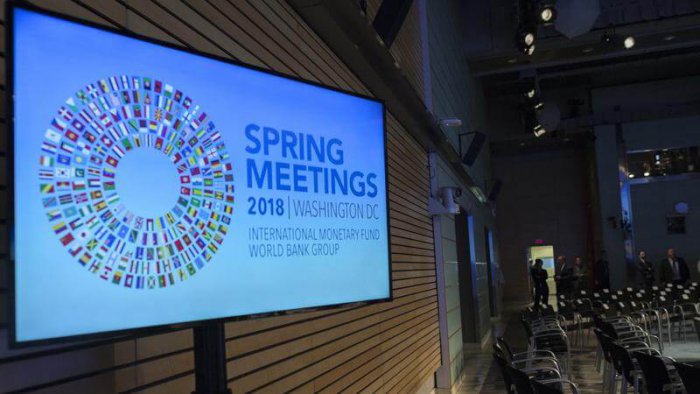 • Devex offers five takeaways from the 2018 World Bank and International Monetary Fund Spring Meetings. While more money has been allocated for high-priority funding opportunities, it comes with strings attached.

• How can private funders fill the gap left by the World Bank? How do the financial and policy agreements potentially dull the impact of funding from the World Bank?

President Jim Yong Kim has argued that as the bank’s shareholders have asked it to play a central role in some of the world’s most pressing challenges — climate change, support for refugee hosting countries, fragile states — they must also help the institution scale up its financial resources accordingly.

The capital increase deal, agreed by the bank’s governors and announced during the meeting of the Development Committee on Saturday, includes $7.5 billion of additional shareholder capital for the International Bank for Reconstruction and Development, the branch of the bank that makes loans to middle-income countries, and another $5.5 billion for the International Finance Corp., the bank’s private sector arm.

The capital increase includes both financial and policy agreements, which have been hashed out behind closed doors by bank leaders, country representatives, and other key development players.

IFC’s last major increase came in 1992 when the institution was given a $1 billion boost, and in 2010, when the World Bank received $5.1 billion in paid-in capital while IFC received $200 million. Now, however, since IFC claims to leverage four times what it invests off its own books, the additional capital could grant the institution investing power to rival that of its fellow World Bank branches.

President Kim has high hopes for the new country ranking system he plans to unveil in October at the World Bank’s annual meetings in Bali, Indonesia — and he has embraced the possibility that the new index could spark some controversy.

IFC and the World Bank have identified digital economies in Africa as a priority and also an opportunity to operationalize the institution’s commitment to working more collaboratively across its constituent parts.

Read the full article about the World Bank Spring Meetings by Michael Igoe and Sophie Edwards at Devex International Development.