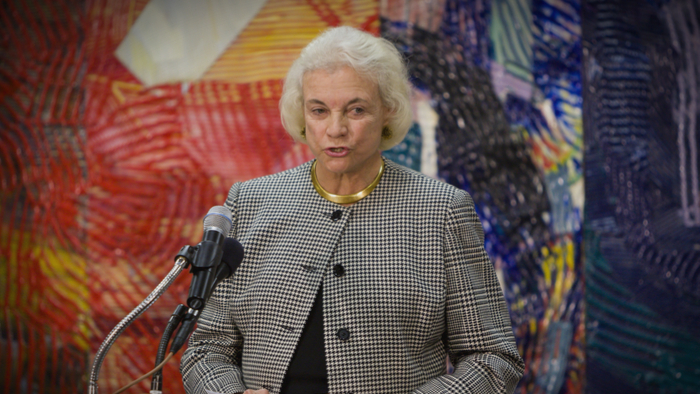 • Sandra Day O’Connor founded iCivics in 2006, a nonprofit organization that helps students participate in civics education in the classroom.

• How can more nonprofits and edtech experts partner with schools to make these programs accessible to students? What are the key elements that we want young people to learn regarding democracy and government?

• Read about the importance of teaching social studies.

Now seems as good a time as any for educators to teach their students some civics. Sandra Day O’Connor, former Supreme Court Justice—and the first woman to serve on the country’s highest court—devoted herself to advocating for higher quality and higher priority civics education after she retired from the Court in 2006.

In her letter to the nation last week announcing that she would be withdrawing from public life for health reasons, O’Connor, who is 88, took the opportunity to emphasize once more how critical it is for U.S. citizens to understand their government and participate in democracy.

“It is my great hope that our nation will commit to educating our youth about civics, and to helping young people understand their crucial role as informed, active citizens in our nation,” she writes. “I feel so strongly about this topic because I’ve seen first-hand how vital it is for all citizens to understand our Constitution and our unique system of government, and participate actively in their communities.”

In 2009, O’Connor founded iCivics as a way to make the core tenets of civics “relevant and remarkably effective” for middle and high school students through online, interactive games and resources. All 19 iCivics games are free and nonpartisan. They run the gamut of civics topics, including the Bill of Rights and immigration law. A recent addition is a media-literacy game called “news feed defenders.” Students serve as the editors of a publishing platform and must make quick judgment calls on what is accurate and fair, but also popular.

Nine years later, and with an estimated presence in half of U.S. schools, iCivics is still in pursuit of its original goal: reaching every student in America.