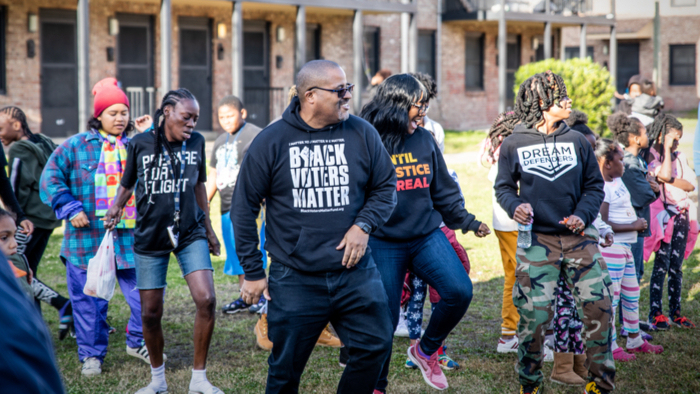 Just three years old, Black Voters Matter has already proven it may be young, but it’s mighty. The organization was founded after co-founders Cliff Albright and LaTosha Brown successfully mobilized Black voters in Alabama for the 2017 U.S. Senate special election.

Now, the organization serves 11 states — Louisiana, Mississippi, Georgia, South Carolina, North Carolina, Tennessee, Michigan, Pennsylvania, Texas, New York, and Kentucky — where it focuses on strengthening democracy through power building in Black communities. As the country faces a pandemic and a reckoning about race, Black Voters Matter is working to support Black communities in advocating for the issues affecting them, at the local and national level.

Alexis Buchanan Thomas, Black Voters Matter Development Manager, recently spoke with Giving Compass about the organization’s priorities, what the team is hearing from communities, and how donors should think about funding. The interview has been edited for length and clarity.

Black Voters Matter has several priorities, including voter education and staffing the polls with younger voters. Can you share more about that?

This year, it’s really about educating voters on mail-in and absentee ballots. We know there are [voting access concerns] with that too. We saw it in Georgia where the state was requiring voters to put their own postage on their mail-in ballot. We were part of a lawsuit with the ACLU arguing that it creates a poll tax for some people who can’t necessarily afford it.

Regarding poll staffing, we are reaching out to partners and thinking about a campaign targeted toward Gen Z and millennial voters to recruit them as poll workers. We think it’s a great opportunity for them to be involved in the process firsthand and also helps prevent what we saw in Georgia, where the lack of poll workers led to problems at voting locations.

What are you hearing/observing in the communities you’re interacting with?

We’re hearing concerns about COVID. We know it affects Black communities disproportionately — higher infection and death rates, but there’s also the economic effects that COVID is having on Black communities. We don’t know what’s going to happen with the federal stimulus bill and eviction and utility moratoriums are running out. We’re also hearing a lot about police reform and defunding the police.

We’ve created two funds to address these issues that no one thought would be prevalent in 2020. The Saving Ourselves Fund will provide grants to organizations providing COVID mutual aid in Black communities. [Grants from the] Resistance Bail Fund have been dispersed to organizations in more than 30 states to bail out protestors and help with legal assistance.

We’re pivoting to address what we hear on the ground. That’s how we build our organization: By listening to what the communities say they need and helping them to educate themselves and advocate for these issues.

Can you talk about Black Voters Matter’s progress?

In some targeted areas, we’ve seen as much as a 65% turnout rate among Black voters that we touch. Since 2017, our work has resulted in much more elected representation, such as circuit court judges and mayors, for Black-majority communities in the states where we work.

What is your biggest challenge right now?

The shift in our work from face-to-face to digital canvassing. It requires a bigger investment. With digital organizing, you’re competing with a lot of different things at one time, so you have to do more of it to be successful. We’ve had to increase our budget: More radio ads and text campaigns to make a bigger effect. We’ve also had to support our partners with digital organizing. Some of them have been doing this work for a long time and they’re used to doing it one way (face-to-face).

Civic engagement and community power isn’t just about one election. How should philanthropy be thinking about this issue in the long-term? What can it do to ensure the Black community has power?

We’re never focused on just one election. We’re looking at local elections and rural areas that aren’t necessarily touched by politicians. There’s always going to be an election that we can galvanize voter engagement around. Part of what we do is relational organizing. We go into communities and talk to them about the issues they have and how we can help them advocate for those issues. For example, we are currently also doing climate justice work in Albany, GA. In community meetings, we kept hearing about how high utility bills were. Through research, we found out that one of the biggest issues was that the city runs its own utilities and it was a big source of revenue for the city.

We educated the community on how to advocate for a Public Service Commissioner and on what a Public Service Commissioner is — an elected official who decides utility rates. The community members came together and found a candidate they felt could represent the community best and now they have an elected official. There’s always going to be issues like that where we can get voters engaged in. It’s for long-term sustainability and that’s what donors should be thinking about — supporting these efforts and building sustainability for these efforts through multi-year capacity building grants.

It’s also about recognizing that local organizations doing the grassroots work in rural areas don’t have access to the same resources that organizations in urban areas do. These rural communities, particularly in the South, are often the laboratory for regressive policies and Draconian forms of barriers to voting. We prioritize funding for rural organizations and believe that increasing investment and capacity-building in the South will help strengthen marginalized communities in ways that will have a positive impact on the rest of the country, and that philanthropists should consider tailoring their funding guidelines and requirements so they can allow more of these types of organizations to become sustainable.

In 2020, success would be having the highest amount of Black voter turnout in all the targeted areas we serve. Also, removing barriers to voting. We’ve seen it already in the primaries. And, having long-term support to address COVID in Black communities, as well as continued movement with the Defund the Police movement.

What do you want donors to know?

What’s next for BVM?

We had a criminal justice platform before this and it kind of exploded with the George Floyd incident. We already had a plan to extend it into more states. We’re also looking at how we’re going to grow our own organizational model. We’ve had an exorbitant amount of requests from different states, so we’ve been kicking around creating something like “BVM in a Box” with tools to help communities across the United States to accomplish their goals.