Cape Town Water Crisis Serves As Warning to the World 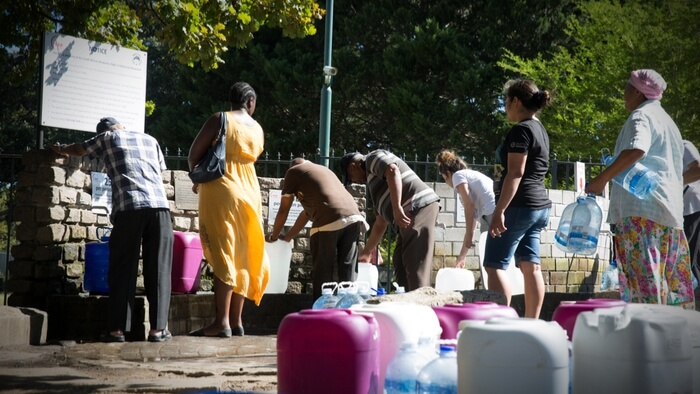 There’s a city wilting before our eyes.

Cape Town, South Africa has experienced record droughts over the past four years and, as a result, officials are warning about a “Day Zero” when reservoirs and storage basins will be too low to provide enough water for citizens. At that point, taps will be turned off and water will be rationed at various collection points. The Western Cape’s premier, Helen Zille, said that the potential challenge “exceeds anything a major city has had to face anywhere in the world since the Second World War or 9/11.”

It’s likely that climate change has played a part in this crisis, and that Cape Town has provided a glimpse into one possible dire future for all of us.

Consider that, according to the United Nations Climate Science Panel, for each degree of global warming, about 7 percent of the world’s population will have 20 percent less freshwater, and we could be facing a 40 percent water deficit worldwide if trends continue unchecked.

The U.S. is certainly not immune. In a recent Nature Conservancy study, more than a quarter of the 482 largest urban areas in the world are projected to have significant water deficits by 2050, with Los Angeles topping the list, and San Diego and Phoenix not far behind. Overall, more than 230 million people will be affected as demand increases by 80 percent over that time period.

In other words, we need to change. Fast.

Water We Going to Do About It?

“Cape Town is symbolic of the challenge that many cities are going through,” says Nature Conservancy Lead Scientist Rob McDonald.

Even in areas where there is too much water, sourcing becomes an issue. Michael Tiboris, Global Water Fellow at the Chicago Council on Global Affairs, says, “Old infrastructure in cities like Chicago isn’t really designed to handle heavy rain events, so we have flooding problems, which increases pollutants into waterways.” Closer to the coastline, extreme weather can also cause saltwater incursion, which is another public health hazard.

There are two ways out of the mess: get more clean water and/or be more efficient at using it.

The first effort presents significant logistical issues: Retrieving water from sources off the grid is time-consuming, wastes energy and costs a lot of money. Desalination (extracting salt and minerals from saline water for human consumption or agriculture use) might be effective in the short-term, but produces high emissions.

The second effort appears to be better for the longer view. Fixing leaking pipes in cities’ infrastructure could save billions of gallons of water, while the Nature Conservancy estimates that even a moderate 10 percent bump in efficient agriculture practices (aided by better sprinkler technology and drip irrigation) could help 78 percent of cities vulnerable to water deficits.

The biggest obstacle for water security in the future, though, may be political willpower. Says Tiboris, “If you raise water rates, if you encourage people to conserve in times when there isn’t an immediate crisis, if you try to change behaviors that will be a burden, if you advocate for building a big, expensive infrastructure, then those things tend not to go over so well.”

At least in Cape Town, there is some hope that the city can get to the rainy season without running completely dry: Citizens have drastically cut down water usage (90 second or less showers, using runoff from tooth brushing to flush toilets), while local farmers have diverted some water to mitigate the supply loss. Officials have now pushed back Day Zero from May to July.

How To Make An Impact

Focus on the people who need water the most. While “Day Zero” is scary sounding, we shouldn’t need an emergency in an urban population to get serious about helping people access clean water. “There are few places you could put your money that would make more of a direct impact on the essentials of life than water,” says Tiboris, who notes that two million children die worldwide each year from water-borne illnesses and that a lack of sanitation at school is one of the major things that keeps girls from getting an education in many parts of the world. “It has a huge effect on quality of life, economic prospects and gender equality.” WASHfunders is an excellent resource in this area. You can read more about their work here.

Think about sustainable infrastructure. It’s one thing to give people wells and water pumps, but it’s another to put better practices in place. Solar-powered water systems — like the one in Malawi — are being implemented in many places that have struggled the most with drinking water and sanitation and don’t have access to standard energy grids. “Heavy” infrastructure is out. “Soft,” diffuse infrastructure is in.

Do your research. The Nature Conservancy has a list of funds whose goals are to minimize treatment costs and reduce water shortage risks in the future. It’s no exaggeration to say: Our future may depend on it.