Clean and Affordable Water for All, Starting at Home 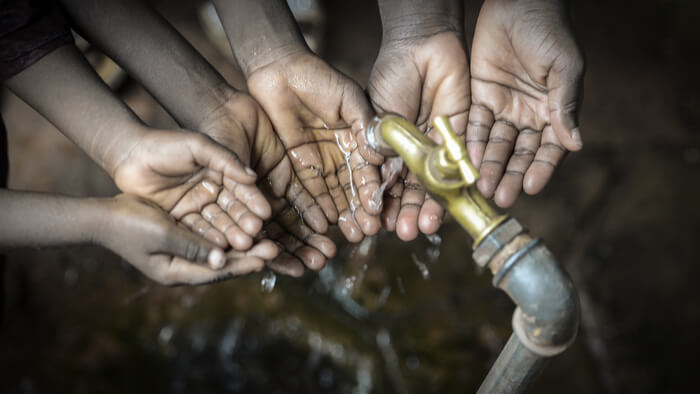 The United Nations Sustainable Development Goal of achieving clean and affordable water for everyone in the world by 2030 may seem fantastic. How can we get safe water to rural Africa for a reasonable price? How can we put the necessary infrastructure into places with unstable political regimes? The scale of the problem is overwhelming. The urgency of the need is oppressing.

When it comes to water safety and accessibility around the world, it is easy to think of the developing world as the target area for change. However, it is crucial to be critical of the water regimes that exist in the developed world.

Learning and benchmarking are key steps towards becoming an impact giver. If you are interested in giving with impact on Natural Resources take a look at these selections from Giving Compass.

The United States and other developed nations still struggle to provide clean water to all of their citizens. In developing countries, the need is even greater. Around the world, one-tenth of the population does not have access to clean water.

Clean Water in the United States

Although Americans live under laws intended to protect the vital resource, water quality and access are not a given in the US. Flint, Mich. is a stand out example of criminal mismanagement: untreated, contaminated water was fed through lead pipes into the homes of innocent civilians. Worse, the contamination was not immediately identified.

Lead testing in Flint did not follow the EPA-recommended procedure. Results were falsified through the unethical altering of proper testing methods, including flushing water through pipes before conducting tests. This practice and other, similar, practices are not unique to Flint. Subsequent inquiries have identified many cities across the country that are not using the EPA-recommended testing methods. As a result, lead contamination can be grossly underestimated.

In the years since the Flint water contamination story first came to light, there has been little progress on this issue. Lead pipes are slowly being replaced in Flint, but many families still drink and bathe in water brought in from elsewhere. The improper lead-testing methods are still in use in other cities, putting an unknown number of people at risk.

Simply by complying with EPA water quality recommendations cities can ensure that their residents are receiving proper information about the quality of their drinking water. This can keep populations safe and informed. The dangers of lead poisoning can and should be avoided. Allowing cities to endanger their communities is unacceptable.

Accessible Water in the United States

Even places where the water is free from contamination are not without concerns. The drought in California that was declared a state emergency in 2014 appeared to end in the spring of 2017 when heavy rain and snowfall battered the state. Subsequently, snowpack exceeded the average and reservoirs rose.

And yet the fear remains. The water table has not been replenished. People in rural areas are forced to connect water lines as their wells go, and stay, dry. The drought conservation practices have become new normal for many people. This is for the best, conservation now means a fuller supply and less stress later on. Cities that saw their reservoirs diminished and were forced to buy water have been looking for methods of ensuring their supply in the years and decades to come.

For some cities that sit along the coast, the draw of the ocean has been irresistible. Why go thirsty when the largest water supply in the world sits right next to you? Desalination plants draw in the ocean water and purify it to drinking standards.

Desalination may seem like an obvious choice. Israel, once water insecure, now uses desalination to create a water surplus that they can use as a bargaining tool. But there is an environmental price for desalination. Sucking the water out of the ocean has consequences for sea life and the concentrated brine that is created as a byproduct is usually pumped back into the ocean. This changes the salinity of the water, and not all saline can adjust to the influx of salt. The process is also highly energy intensive and, partially as a consequence of that, very expensive.

Achieving the Goal of Clean and Accessible Water for All

The United States and other developed nations still struggle to provide clean water to all of their citizens. In developing countries, the need is even greater. Around the world, one-tenth of the population does not have access to clean water, according to the World Health Organization. This must change, but it will be a hard process.

There are no easy answers when it comes to clean water. Everyone on earth requires access to water for drinking, cooking, and sanitation. We also need water to grow our crops and fuel our economies. The demand for water will only grow as the human population increases and pollution reduces the natural availability of clean water. Climate change will shift water patterns globally causing floods, droughts, and uncertainty.

4 Ways You Can Be Part of the Solution

If you are looking for opportunities to take action and give money to Natural Resources, here are some Giving Funds, Charitable Organizations and Projects aggregated by Giving Compass where you can take immediate action.