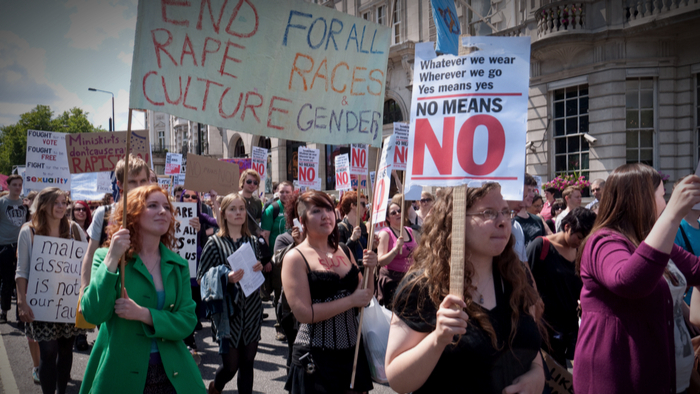 Public sexual harassment is an issue in every society. But misogyny and sexual harassment in public has been so normalised that often bringing up the issue of behaviour such as cat-calling or wolf-whistling can lead it to be dismissed as “just a joke.”

Around 90% of women in the UK have experienced public sexual harassment, with victims as young as 11, according to a UN Women UK YouGov survey. Despite its impact, however, there is currently not much protection against it — in the UK, you can be fined for littering but not for sexually harassing a child in public.

Luckily, there are people fighting to change the law and shift attitudes towards these ingrained behaviours in Britain, and 23-year-old Chiamaka Elumogo — lead campaigner for Our Streets Now — is one of them. The grassroots campaign group was set up by two sisters fed up with street harassment, Maya Tutton, 21, and Gemma Tutton, 16, in 2019. It calls for new laws that would criminalise public sexual harassment as well as providing educational campaigns.

On Dec. 3, as a result of advocacy from groups including Our Streets Now, it was announced that a new review of hate crime legislation in Britain is expected to ask the government to consider criminalising public sexual harassment — which would included lewd comments, pressing against someone in a sexual way on public transport, cornering someone, catcalling, and persistent sexual propositioning.

The Law Commission, a regulatory body that recommends new laws, is recommending a draft bill that would introduce fines for this type of harassment. However, as part of the same review the Law Commission rejected the proposal to make misogyny a hate crime.

Alongside her studies — she is a final year medical student at the University of Buckingham — Elumogo helps the campaign by running Our Streets Now’s Twitter account and using her voice to raise a profile for the group. She has been passionate about intersectional feminism since she first started learning about it when she was 15 and says she leapt at the chance to get involved with Our Streets Now.

Read the full article about sexual harassment in the UK by Sesina Hailou at Global Citizen.

Since you are interested in Europe, have you read these selections from Giving Compass related to impact giving and Europe?