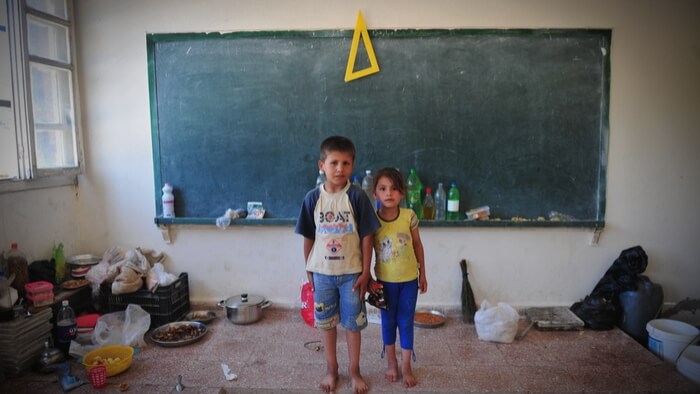 • Researchers from RAND Corporation conducted a study about the refugees settling as non-citizens within Europe and offers up challenges for integration as well as resettling strategies.

• What (if any) are the long-term solutions for refugees who have fled their country? Are there other ideas than trying to live in closed camps and integrate as best as possible?

• Want to get involved? Read about ways you can help Syrian refugees right now.

Since the Syrian civil war began in March 2011, over 6.1 million Syrians have been internally displaced, while an estimated 5.6 million more have fled the country. Within the European Union (EU), close to 1 million of these refugees have requested asylum in different countries, with Germany being the primary destination.

The response to the refugee crisis from international organizations and host country governments has largely focused on providing humanitarian assistance for refugees. Given that the Syrian conflict has already lasted for seven years, and with no short-term solution in sight, a strategy that addresses the evolving long-term issues of refugees in their host countries is essential.

In late 2016 and early 2017, the nonpartisan RAND Corporation conducted a study as part of the Pardee Global Human Progress Initiative to provide an overview of the situations of refugees and non-citizens in host countries, as well as to summarize policies and legislation regarding refugees.

In the context of increasing refugee flows from Syria, multiple E.U. countries’ populations believe that refugees’ presence could increase terrorism and take jobs and social benefits away from residents, according to the Pew Research Center’s spring 2016 Global Attitudes Survey (PDF).

Although employment indicators show that noncitizen residents of European countries report performing higher proportions of paid work than citizens, after studying those who reported being unemployed and actively looking for jobs, noncitizens showed higher levels of joblessness when compared to citizens in Germany, Greece, Italy, and the U.K.

Despite these barriers, political commitment coupled with public support and community engagement—including private sponsorship of refugees—determined Syrian refugees’ successful resettlement. Different stakeholders’ involvement in Canada, which has resettled over 25,000 Syrian refugees, has helped successfully integrate them into Canadian society.

Immigrant Refugee is an important topic. Other members found these Giving Funds, Charitable Organizations and Projects aggregated by Giving Compass to be relevant to individuals with a passion for Immigrant Refugee.