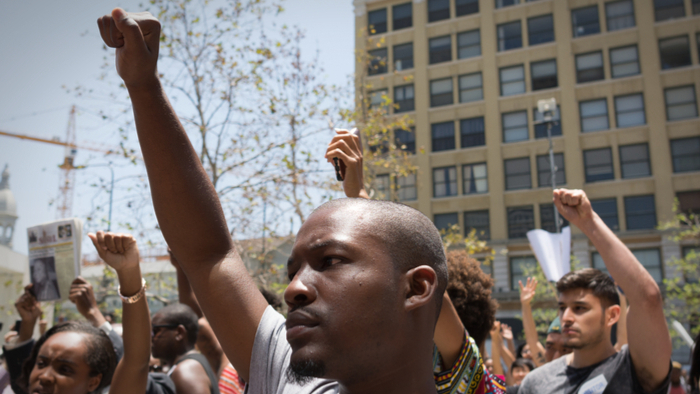 • Fredrick D. Scott argues that protests are insufficient to improve the state of civil rights in the modern day and that black Americans must pool capital and work together to make an impact.

• How can funders be part of this type of a solution? What role is there for protests in this plan?

To ensure their economic stability and viability, the Jewish community pooled their resources and bought up real estate around the country both commercial and residential and became active participants in the political process. They give millions of dollars both directly and indirectly to political campaigns at the National, State and Local levels. Because of that forward thinking, they are able to influence legislation in a way that benefits their community. When they don’t like the academic curriculum of a school system, they again, pool their resources together and build their own schools or they influence the legislation of the local government to refine the curriculum in a way that better suit the academic and religious needs of their children.

Until roughly 15 year ago, if you were openly gay, you were harassed, assaulted or systematically fired from your job. You were a social pariah in your neighborhood and often times amongst your family, any discussion in the classrooms about this topic was met with a zero tolerance policy by school boards. It is true that the LGBTQ community marched and protested, but they went a step further, they took a page out of the Jewish book and they pooled their resources and strategically placed it in the political and media arenas to influence legislation and public opinion in a way that benefited their community. Today, there has been a complete shift and public policy and sentiment toward the LGBTQ community.

The solution, from example than, is clear: protesting and marching is no longer sufficient to effectuate change. We must pool our resources and fight for change with our capital, by placing it strategically in the political process and by taking control of our communities through the acquisition or real estate both commercial and residential and by developing viable, sustainable businesses that are developed to become growing concerns. We must support those businesses and each other, we must unify strategically and financially if we expect to succeed and cease being on the losing end of the economic spectrum.

Read the full article about going beyond protests by Fredrick D. Scott at Medium.