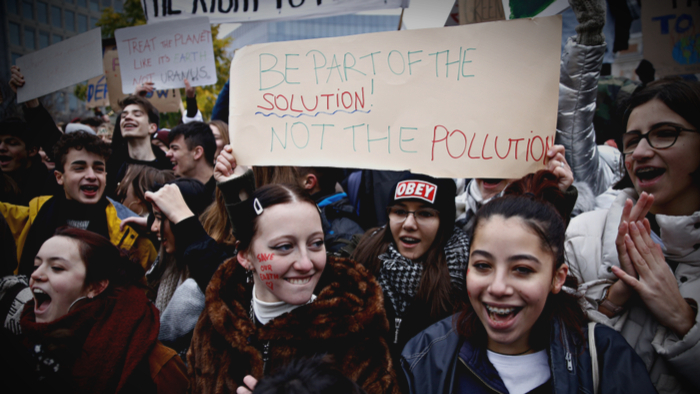 • Student-led climate change protests are sweeping the nation and have now reached the U.S., where many students will be protesting in mid-March.

• What are other examples of young people marching to catalyze change? How can donors support youth agency that focuses on social action?

• Read more about what young people are doing to tackle climate change.

What started with one Swedish high school student’s weekly protest against climate inaction has going global, with hundreds of thousands of students around the world joining similar protests in recent weeks, according to Buzzfeed News.

Greta Thunberg’s “School Climate March,” in which she cuts class on Fridays to protest in front of the Swedish parliament in Stockholm, has struck a chord with young people who are tired of waiting for governments to prioritize environmental sustainability. Her protests have especially resonated with girls, who are marching out of classrooms and onto the streets with posters and chants calling for stronger climate change policies, according to Buzzfeed.

Now student activists in the US who were involved in the “March for Our Lives” protests against gun violence are looking to transfer the organizing knowledge they gained to this global movement.

“There aren’t very many spaces that I can be in charge of, and what I’m going to say is going to be heard,” Jamie Margolin, the 17-year-old founder and executive director of Zero Hour, a climate action movement, told Buzzfeed about her reasons for joining the protests.

In recent weeks, Thunberg has become a kind of moral celebrity for her unflinching critique of governments and companies that are contributing to climate change.

Other youth-led protest movements in the US are already changing the dialogue around  government action on climate change. For example, the Sunrise Movement rapidly inspired politicians to support their call for a Green New Deal — an ambitious plan to phase out fossil fuels by 2030 — through sit-ins and other forms of protests in the House of Representatives.

As climate change intensifies around the world, calls to transition to renewable energy will only grow louder.