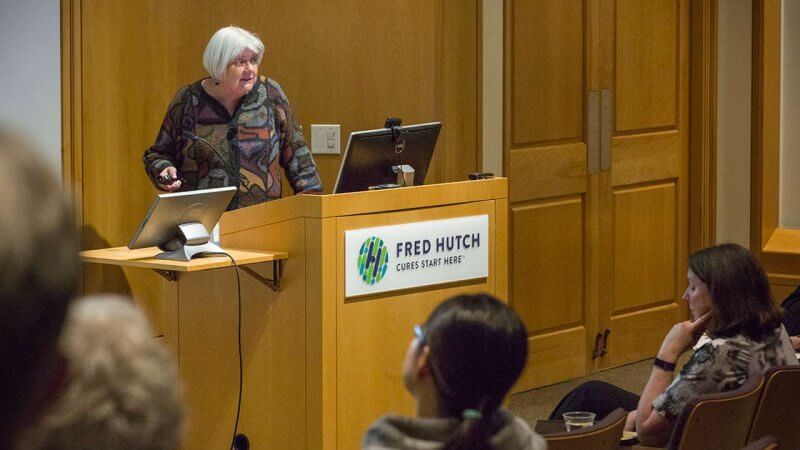 When it comes to cancers that primarily afflict women, breast cancer often gets top billing. But there’s a host of malignancies collectively known as gynecological cancers — ovarian, cervical, endometrial, vaginal and vulvar — that are far less common but can sometimes be more deadly to the women they affect.

Ovarian cancer, for example, affects about 22,000 women every year in the U.S. — less than a 10th of the number of new breast cancer cases diagnosed every year — but it kills about 14,000, according to the American Cancer Society. It’s the deadliest of gynecological cancers in large part because it’s typically diagnosed at very late stages.

Monday, cancer researchers from around the Pacific Northwest gathered at Fred Hutchinson Cancer Research Center to discuss their latest efforts to better prevent, detect and treat these tumors at the inaugural Northwest Gynecological Cancer Symposium …

Fred Hutch public health researcher Dr. Garnet Anderson presented an overview of findings on ovarian and endometrial cancers from the Women’s Health Initiative, or WHI, which is one of the largest prevention studies addressing postmenopausal women’s health in the U.S. and whose coordinating hub is housed at the Hutch …

The WHI included a diet intervention trial, testing whether a long-term, low-fat diet would reduce the risk of breast cancer. That study failed to show a beneficial effect for overall risk of breast cancer, but Anderson pointed out that a low-fat diet did reduce the risk of ovarian cancer by 17 percent — not a huge shift, but the largest effect they saw in that trial. For women who were eating a high-fat diet before they started on the dietary trial, their reduction in risk of ovarian cancer was even larger.

If you are ready to take action and invest in causes for Health, check out these Giving Funds, Charitable Organizations and Projects related to Health.