How Zoos Are Making an Impact for Endangered Species 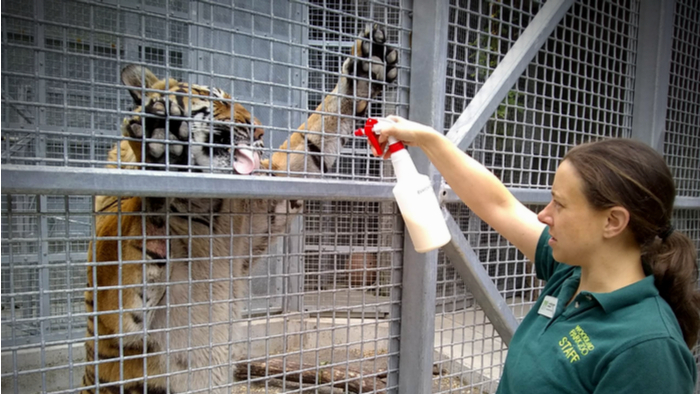 As a child, I always looked forward to visits to the Woodland Park Zoo (WPZ) – the animals, the plant life, the playground – but I didn’t fully appreciate it until I visited as an adult. I recently learned that my childhood nostalgia for the zoo was carefully crafted by a team dedicated to ensuring that visitors like me are left with fond memories and a drive to take action toward conservation.

For visitors like me, the conservation journey begins with an introduction to an animal. I met Eko, one of the three Malayan tigers that currently reside at the zoo. Eko lay relaxing when we arrived but made his way over to us when Christine Anne – one of the lead keepers – called his name. Behind the bars of his cage, Eko was perfectly behaved as Christine Anne walked him through the routine designed to allow for visual inspections by veterinarians without the need for anesthetic. Eko was rewarded with evaporated milk, further reinforcing the image of a tame housecat. Christine wants to use a GoPro to film the tigers feeding to dispel that image. She reminded us that, given the chance, Eko would quickly and easily kill and eat any one of us. Her reminder disappoints the part of me that would like to pet Eko, but it also endears him to me further. But I came into the middle of a conservation story that started long before Eko and his brothers came to the WPZ.

Malayan tigers are one of many species identified by the Association of Zoos and Aquariums as being both in danger of extinction and as promising candidates for captive breeding programs. Christine hesitates as she explains, and it comes as no surprise that she expresses remorse for the animals that have been identified as high-need but not ideal for intervention by zoos. She mentions that Sun Bears had previously been the target of zoo conservation programs, but they struggled to breed in captivity and zoos then turned their attention to other species that they were better equipped to help. She assured us that the big cats reproduce well in captivity, although Eko and his brothers will have to wait years before they breed.

There are only 60 Malayan tigers in captivity in North America. Eko’s family represents a large portion of the gene pool, so it will be a while before the gene matching services that zoos use to plan breeding pairs him with a mate.

Although conservation efforts that the zoo supports on the ground in Malaysia look promising, the captive population is being kept as genetically diverse as possible in case the need for reintroduction into the wild is necessary. To avoid that less than ideal situation, the WPZ has partnered with Panthera to create a sustainable solution to the crisis tigers face in Malaysia.

Malayan Tigers in the Wild:

The problems are two-pronged. Poachers hunt and kill tigers illegally on smaller and smaller plots of land as deforestation diminishes the tigers’ natural habitat. To address these problems the WPZ and Panthera work with local communities through local nonprofits Rimba and Pemantau-Hijau to provided multi-faceted solutions. They conduct their work on many levels. To create long-term sanctuaries for tigers, they work with politicians to get conservation areas dedicated. Researchers keep tabs on the population of tigers – currently stable at around 300 – and deter poachers through their constant presence. The key to a sustainable future for the tigers is a sustainable economy for the local communities who will protect the tigers and their habitat while it does not prevent them from surviving themselves.

The WPZ is groundbreaking in many ways. Currently, they are making use of a $5 million grant to study human/animal relationship so that they – and other zoos across the country – can use evidence-based methods to engage visitors for conservation.

They have a solid foundation for their work. My recent visit to the zoo was every bit as enchanting as my childhood memories. The big glass windows of the tiger exhibit offer a beautiful and immersive experience for visitors who can watch Eko and or one his brothers in the viewing enclosure – the solitary males will not tolerate each others’ presence – and see their training. In the adjacent exhibit, visitors can interact with displays and learn more about Eko’s wild cousins in Malaysia. The glimpse of the world of the Malayan tigers draws in visitor and sparks conversation, and conservation actions.

Zoos all over the country are working together to conserve endangered species in the wild and need support from donors to carry out their work and the research that allows them to maximize their impact. For visitors, it starts with a newfound appreciation for an animal, an opportunity to learn more, and a call for action. The WPZ is conducting research to maximize their impact at every step of the process – they aren’t leaving conservation to chance.

The Zoo and You:

Here are a few ways for donors looking to get involved in animal conservation to join the movement.

If you are looking for more articles and resources for Conservation, take a look at these Giving Compass selections related to impact giving and Conservation.