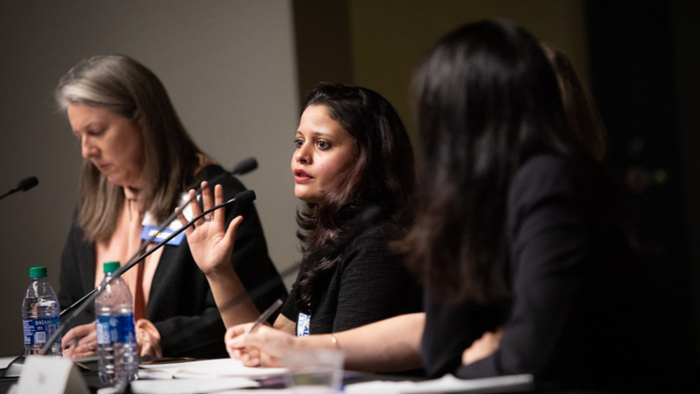 Insights from the Global Washington 2019 Goalmakers Conference and Women of the World Breakfast.

For many girls and women, life is one obstacle after another.

“If you were to ask me when my fight for survival began, I would tell you that it started in my mother’s womb,” said Zainab Ali Khan, founding working group member of Every Woman Treaty. Which isn’t to say she doesn’t have hope.

“There’s never been a better time in history to advocate for the end of violence against women and girls,” she said. “There has been unprecedented momentum all over the world.”

Khan shared her experiences with community leaders and philanthropists at the recent 2019 Global Washington Women of the World Breakfast in Seattle, hosted by Global Washington and the Seattle Foundation, including a heart-wrenching story of being sexually assaulted as a young girl in Bangladesh — and the effect misinformed cultural norms had on her.

“[The attacker] knew I would keep silent about it because there is such a social stigma attached to sexual violence in our countries and our cultures,” Khan said. “An eight-year-old girl who was sexually assaulted only thought to keep it under wraps to save the honor of the men in her family.”

The breakfast coincided with the launch of the 2020 Women of the World campaign to end violence against women. A leadership group of Women of the World will spend a year diving deeply into the issue and determining a path forward through collective action and thought leadership.

Women and Girls: A Focal Point

Global development practitioners have long known that investing in women and girls isn’t just the right thing to do, it’s also crucial to global success and economic prosperity. Gender equity — Sustainable Development Goal (SDG) 5 — is often viewed as the linchpin for the success of the other 16 SDGs.

Clearly, building on the success of ongoing discussions around gender equity is critical. And these discussions, including those held at the 2019 Global Washington Goalmakers Conference, can also provide insight for donors looking for a way to incorporate the SDG framework into their giving.

For example: Donors who haven’t focused squarely on gender-based violence, but give to WASH (water, sanitation, and hygiene) initiatives, might consider the role clean water and sanitation (SDG 6) plays in decreasing a woman’s vulnerability to violence.

And because it intersects with so many other issues, menstrual hygiene management — ensuring women and girls have access to sanitary materials and proper facilities — is also emerging as an area that can drive significant impact. Historically under-resourced and under-researched, proper menstrual health is now understood to be a path toward education (SDG 4), creating a better chance for prosperity. When each year of primary school increases girls’ future pay by 10-20%, then reducing time spent out of school managing what should otherwise be simple hygiene becomes obvious. Education is also tied to marrying later in life, having fewer children, and being less vulnerable to violence.

“As this issue area becomes more prominent on the global health and development agenda, you’ll hear more people say … ‘this is social norms, this is education, and infrastructure around WASH,’” said Stephanie Drozer, chief program officer, Days for Girls.

How Donors Can Support Gender Equality

There are a number of avenues donors can take to support women and girls.