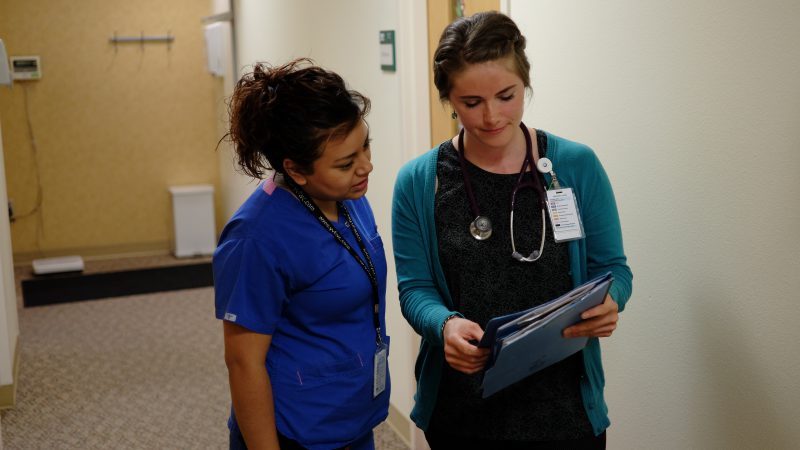 Annali Solorio’s dreams of higher education stalled when she became pregnant at an early age and had to work while raising her daughter. After her child entered school, Solorio began working at the Yakima Valley Farmworkers clinic, a member of the Washington Association of Community & Migrant Health Centers (WACMHC).

When her supervisors approached her with an opportunity to enter an apprenticeship program to become a medical assistant, she was thrilled.

“I didn’t have to pay anything. It was amazing. I knew that I did want to one day become a medical assistant, but going back to school and [taking out] student loans was not an option at the moment. I was grateful for the opportunity,” Solorio said.

The idea of an apprenticeship conjures up archaic images of a medieval blacksmith learning a trade and carrying on an age old tradition of craftsmanship. But apprenticeships are being reinvented for today’s employers and workforce. SkillUp Washington, a workforce funders collaborative created by Seattle Foundation in 2007, is helping reignite the practice of apprenticeship in career paths not historically associated with the practice, including healthcare.

“Apprenticeship is so much more than building and manufacturing; it is applicable across industries,” says Susan Crane, executive director of SkillUp Washington.

Working with community partners and aided by funding and assistance from SkillUp, WACMHC created and built its apprenticeship model. The program, which offers free training and certification as medical assistants to low-income individuals, also received generous support from a JP Morgan Chase Foundation grant awarded to SkillUp.

“Apprenticeship is the oldest form of education and job training in the world,” Crane said. “This hands-on approach to education translates into real differences in the skills and capacity of apprenticeship graduates in the workplace.”

The Medical Assistant Apprenticeship program, the first of its kind in the state of Washington, was created to fill a need in the healthcare industry. There are 18 employers participating in the program statewide and more than 100 apprentices enrolled. Two major King County healthcare providers, Sea Mar Community Health Centers and Overlake Hospital, will offer the program to their employees.

High demand for medical assistants has led to bidding wars by hospitals and clinics over qualified candidates and is fueling expansion of the program. WACHMC is using a U.S. Department of Labor grant to expand the program, including tracks for recent high school graduates and engaging tribal clinics as employers. Additionally, through an affiliation with South Seattle College, those completing the medical assistant apprenticeship will also receive college credits that help them get a head start on more advanced healthcare occupations, like nursing.

Abigail Blue, deputy director of operations at WACMHC, says one goal of the program is for graduates to reflect the local community. Seventy percent of graduates from the 12-month apprenticeship are Latina women living in underserved areas of Eastern Washington. Many of them are single mothers who live in multigenerational households and face financial, geographic or familial barriers to attending a traditional college. The program enables them to get a debt-free education while still working full time to support their families. Blue shared how patients value interaction with medical assistants who understand their culture and community. “Someone who is bilingual or multilingual understands the experiential reference points of that community. They are an incredibly valuable asset to organizations,” Blue said. “The student feels valued, it builds deeper trust and gives them a sense of being of service to the communities they come from. It is empowering.”

SkillUp works with WACMHC and the Service Employees International Union’s (SEIU 775NW) Training Fund to identify high-quality candidates for the program who are already employed in lower wage, healthcare-related positions such as home-care work. Many of them work in community clinics in Eastern Washington, like Solorio, who said the apprenticeship changed her life.

“They promoted me, they gave me a raise and they changed my title and now I can do vaccines and give medications,” Solorio said. “I feel like I’m more valuable and I do more for the clinic now that I don’t have a limited scope of practice.”

The Medical Assistant Apprenticeship program not only provides career path employment and advancement for healthcare workers, but it does so at far less cost to the industry.

Blue said employers often pay for the training in exchange for a two-year contract. The program has an impressive 99 percent retention rate compared with the usual industry turnover of 40 percent for those within five years on the job. “It is incredibly cheap compared to private or public education,” Blue said. “It is a huge return on investment because you are not spending money on recruitment, replacement and training.”

Apprentices receive mentoring on the job, as well as online classes, regular contact with instructors and hands-on skill days with instructors and fellow students. According to Blue, the program’s graduates function at a high level on the job immediately because they are trained in a clinical setting and can work at the top of their licenses.

Angelica Roque, another apprenticeship graduate, was working full-time while attempting to complete a conventional nursing program one course at a time when she entered the program. A mother of two young children, she would wake up hours before them to complete her assignments.

Roque now trains other medical assistants who came from community college programs and takes pride in serving as a mentor. “I get to train them, to show them what I have learned, so that they can learn too,” she said.

In an environment where living-wage opportunities and jobs are scarce, Solorio and Roque credit the apprenticeship program and certification with helping them advance to the next step in their careers.

Both are now applying to competitive nursing programs and said their medical assistant credentials have made them attractive candidates.

“I am considering becoming a surgical technician. It is a very competitive program. I think they only choose ten students a year,” Solorio said. “My application has a better chance of getting in because I have this experience as a medical assistant. I am so grateful for this program.” 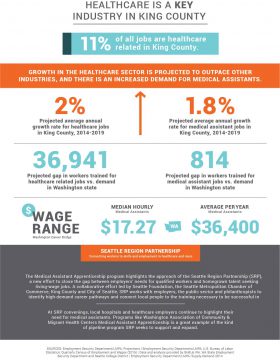