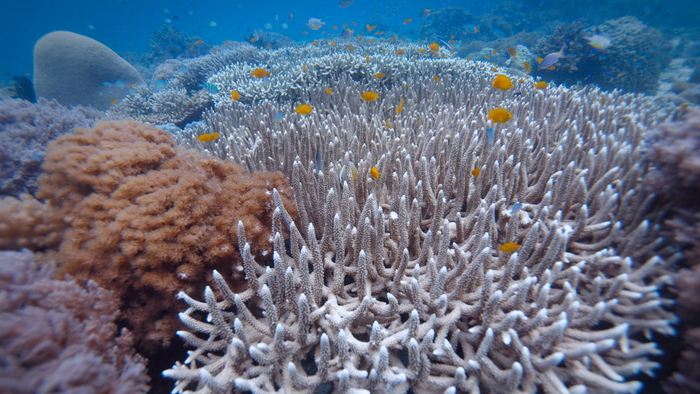 • How can funders work to ensure that fish communities can thrive in the long term?

• Learn about funding the ocean.

The bleaching of coral reefs could permanently change the composition of the fish communities that inhabit them, a new study has found.

The research, published online June 18th in the journal Global Change Biology, traced changes in the mix of species on reefs in Seychelles back to coral bleaching caused by spiking ocean temperatures in 1998.

For reasons that scientists are still puzzling out, higher water temperatures sometimes cause corals to evict their symbiotic algae tenants, draining the reef of its color and often leading to the widespread death of the corals themselves. In the study, bleached reefs had fewer predators such as snappers and groupers and more plant-eating fish such as parrotfish and rabbitfish, ecologist James Robinson and his colleagues found.

“Other reefs have reported recovery of fish communities within 10 years, so we really didn’t expect Seychelles fish to get stuck in these new states,” Robinson, the study’s lead author and a senior research associate at Lancaster University in the United Kingdom, said in an email.

Reefs with fish communities that bounced back to their earlier compositions—like the Great Barrier Reef, for example—are often protected and thus don’t have to deal with the compounding stress of human pressures like fishing, Robinson said.