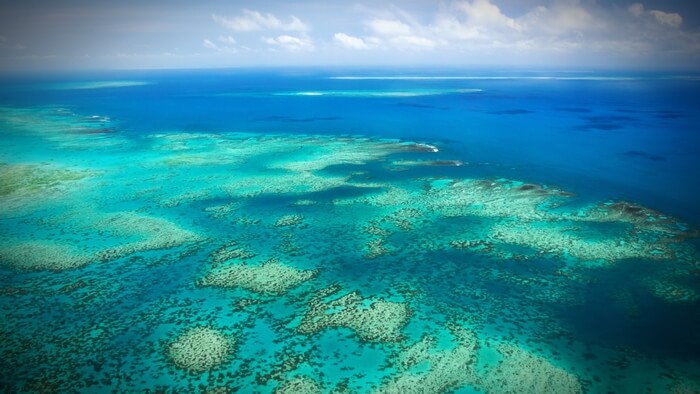 • The Atlantic explores the rapid erosion of The Great Barrier Reef in Australia starting in 2016, choking off half the coral. The cause? Global warming.

• This should raise the alarms over whether the world is meeting the goals set by the Paris Agreement. We’re currently off track by a wide margin, and it’s causing tangible damage.

• For a more visual representation of what’s going on, check out the documentary “Chasing Coral.”

Once upon a time, there was a city so dazzling and kaleidoscopic, so braided and water-rimmed, that it was often compared to a single living body. It clustered around a glimmering emerald spine, which astronauts could glimpse from orbit. It hid warm nooks and crannies, each a nursery for new life. It opened into radiant, iris-colored avenues, which tourists crossed oceans to see. The city was, the experts declared, the planet’s largest living structure.

Then, all at once, a kind of invisible wildfire overran the city. It consumed its avenues and neighborhoods, swallowed its canyons and branches. It expelled an uncountable number of dwellers from their homes. It was merciless: Even those who escaped the initial ravishment perished in the famine that followed.

Many people had loved the city, but none of them could protect it. No firefighters, no chemicals, no intervention of any kind could stop the destruction. As the heat plundered the city of its wealth, the experts could only respond with careful, mournful observation.

All of this recently happened, more or less, off the east coast of Australia. The Great Barrier Reef — which, at 1,400 miles long, is the longest and largest coral reef in the world — was blanketed by dangerously hot water in the summer of 2016. This heat strangled and starved the corals, causing what has been called “an unprecedented bleaching event.”

Though that bleaching event was reported at the time, scientists are just starting to understand how catastrophically transformative it was. A new paper, published recently in the journal Nature, serves as a kind of autopsy report for the debacle.

Environment (Other) is an important topic. Other members found these Giving Funds, Charitable Organizations and Projects aggregated by Giving Compass to be relevant to individuals with a passion for Environment (Other).