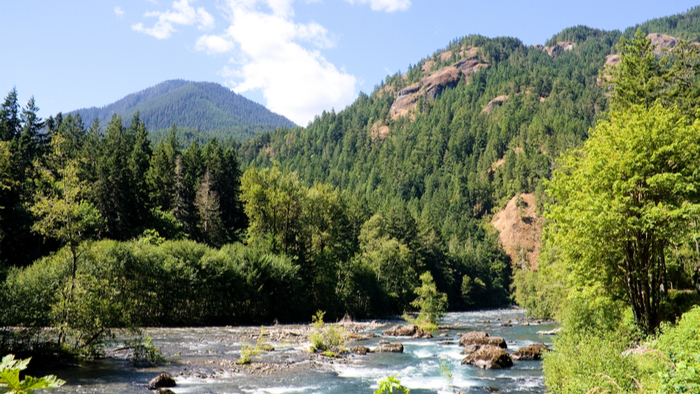 Cameron Macias bent down to examine a small pile of sawdust-filled scat on the floor of the former Lake Mills on the Elwha River in the northwest corner of Washington state in 2016. It was a sign that beavers were moving into the area after a 100+ year absence. “There’s very small dam-building activity in some of the side tributaries,” says Macias, who was working at the time as a wildlife technician for the Lower Elwha Klallam Tribe, of which she is a member. “It’s kind of funny and ironic because of the dam removal,” Macias says with a laugh.

The dams she’s referring to—the Elwha and Glines Canyon dams—were removed in 2011 and 2014 respectively, and together they are considered the world’s largest dam removal project to date. Many other tribes have looked to the success of the Elwha River dam removals in bringing down fish-blocking dams in their lands as well, including along the Snake River and the Columbia River in the Pacific Northwest.

Together, the country’s 2 million dams block access to more than 600,000 miles of river for fish. And by 2030, the American Society of Civil Engineers estimates that 80% of those dams will be beyond their 50-year lifespans. Given how obsolete and potentially dangerous this infrastructure will be, not to mention its negative effects on declining fish stocks, the best solution for many aging dams is to simply remove them. But bringing down a dam is a big job.

When the Elwha River dams fell, it was the culmination of many decades of successful partnerships among the Lower Elwha Klallam Tribe, the National Park Service, the U.S. Fish and Wildlife Service, and dozens of other local and national organizations. Today, those partnerships continue to support the tribe in righting historic wrongs.

The Elwha Dam was built in 1910 to provide electricity to attract new settlers, in flagrant violation of a Washington state law that said dams must allow for fish passage. At the time, no one consulted the Lower Elwha Klallam people, whose culture rests on the salmon that would be blocked by the dams. “We had a few of the elders that even stood in the areas of the lower dam where they were starting to build to protest,” says Frances Charles, the tribal chairwoman for the Lower Elwha Klallam Tribe.

If you are interested in Conservation, please see these relevant events, training, conferences or volunteering opportunities the Giving Compass team recommends.