Understanding the Implications of the Landback Movement on Climate Change 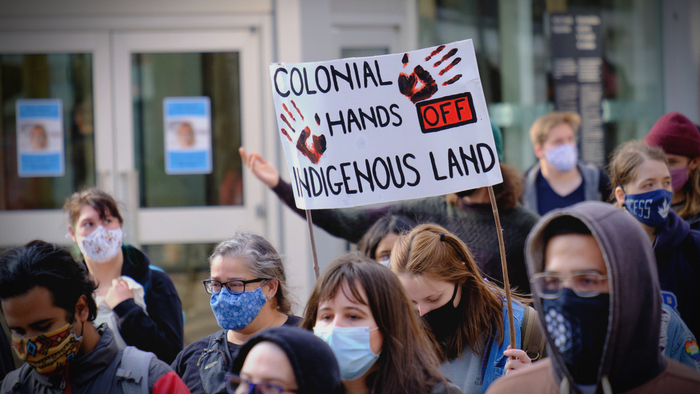 • The landback movement is a struggle to restore lands to Indigenous stewardship in an effort to dismantle white supremacy and curb climate change.

• Read more about climate justice as it relates to Indigenous peoples.

Just before Independence Day, scores of land defenders gathered at the national memorial in the Black Hills of South Dakota as President Trump took the stage for a rally. They came to denounce not just his invective and policies, but the white supremacy, oppression, and violence the immense granite sculpture represents. One demand underscored the protest: Indigenous people want their land back.

The demonstration, which saw the arrest of 20 people, catalyzed a campaign to reclaim the Black Hills and close Mount Rushmore. But the idea of “landback” — returning land to the stewardship of Indigenous peoples — has existed in different forms since colonial governments seized it in the first place. “Any time an Indigenous person or nation has pushed back against the oppressive state, they are exercising some form of landback,” says Nickita Longman, a community organizer from George Gordon First Nation in Saskatchewan, Canada.

The movement goes beyond the transfer of deeds to include respecting Indigenous rights, preserving languages and traditions, and ensuring food sovereignty, housing, and clean air and water. Above all, it is a rallying cry for dismantling white supremacy and the harms of capitalism. Although these goals are herculean, the landback movement has seen recent successes, including the removal of dams along the Klamath River in Oregon following a long campaign by the Yurok Tribe and other activists, and the return of 1,200 acres in Big Sur, California, to the formerly landless Esselen Tribe.

Such victories can help mitigate the impacts of climate change. In 2019, the Intergovernmental Panel on Climate Change recognized that Indigenous rights and climate action are inherently intertwined. From fire management to forest stewardship, Indigenous peoples have over generations amassed crucial knowledge about living and caring for ecosystems in a sustainable manner. It’s no wonder many consider landback a keystone of environmental justice.

Read the full article about landback movement by Claire Elise Thompson at Grist.