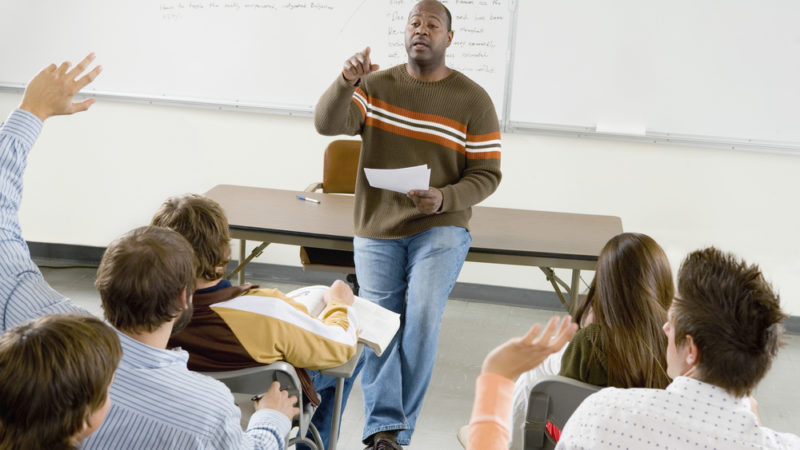 · Despite promises of predominantly white colleges to increase faculty diversity, The Hechinger Report reveals that the hiring of nonwhite staff has declined in recent years.

· Why is it important for students to have a diverse set of professors? How do teachers impact the way students learn?

· Read more on why diversity in school faculty matters.

Robert Palmer knows how uncomfortable it can feel to be a black professor at a predominantly white college.

He recalls speaking with a white student he was advising at public Binghamton University in upstate New York, where just 4 percent of tenure-track instructors in 2016 were black, according to federal figures.

The awkwardness of that encounter and others like it helped push Palmer to Howard University, an historically black institution in Washington, D.C., where he’s now an associate professor of education and on a faculty that is 58 percent black.

There he joined the disproportionate number of black, tenure-track college and university instructors — one out of every five — who are clustered at 72 historically black four-year institutions that report the race of their employees. This despite the fact that those schools account for just 1.7 percent of all faculty nationwide.

Meanwhile, many predominantly white four-year public and nonprofit colleges and universities that have been promising for years to improve the diversity of their teaching ranks have made almost no progress in doing so.

In fact, the proportion of annual faculty hires who are black did not increase in the 10 years ending in 2016, the most recent period for which the figures are available; it fell slightly, from 7 percent to 6.6 percent, according to additional federal data analyzed by The Hechinger Report. (A small number of these hires were non-faculty employees, which were not broken out.)

Read the full article about racial disparities in college faculty  by Matt Krupnick at The Hechinger Report.