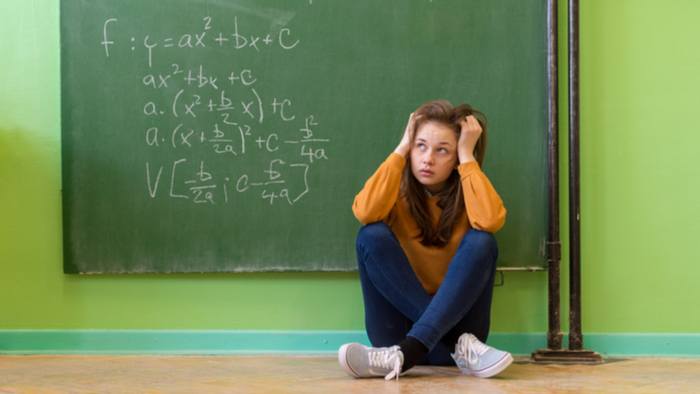 • Cognitive scientist Sian Beilock explains how math anxiety, which inhibits math performance, can be caused by stereotypes and gender norms.

• How can philanthropy best combat math anxiety at scale? How can schools do more to encourage positive associations around math?

Anxiety can hinder people even when they’re solving the most basic math problems, according to a 2017 study on adults with high math anxiety.

To learn more about anxiety’s effects on the brain, The Hechinger Report spoke with one of the authors of the study, cognitive scientist Sian Beilock. The president of Barnard College, her work focuses on how attitude and anxiety affect people’s performance in high-stakes situations, whether in sports or school. She’s tracked how anxiety about math affects performance, especially for girls, and how these attitudes can get passed down from parents.

What is stereotype threat and how does it affect your ability to learn?

Stereotype threat is a phenomenon coined by Claude Steele. The idea is that when you’re aware of a negative stereotype about how you should perform, because of your social group or your gender, it can actually lead you to perform more poorly than you otherwise could.

There was a recent study from Stanford which said that boys tend to outperform girls in math in more affluent school districts, where fathers tend to be the primary breadwinners. What are your thoughts on the study?

I think it’s really interesting. I think the question is, why? What’s different in these areas? Gender differences are really influenced by the environment around you.

One of my colleagues, Susan Levine, had a great paper several years ago showing that in middle and upper-class families you see gender differences in spatial ability that you don’t see in lower-SES [socio-economic status] kids. What this puts forth is that the environment is such an important factor in how we even think about what some of these differences mean.

Read the full interview with Sian Beilock about math anxiety by Sharon Lurye at The Hechinger Report.