When we support the people leading the fight, we make the fight that much easier. 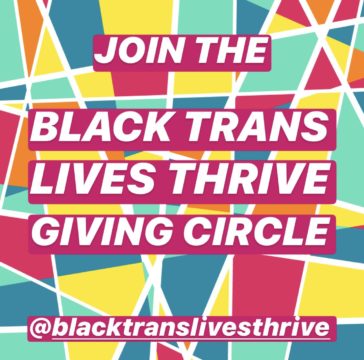 Founder Bridget Conway-Taylor, an Australian digital strategist living in Brooklyn, started Black Trans Lives Thrive in June 2020 in response to the racial justice uprising. At the time of the circle’s founding, she says, “I was away from New York, not able to be in the streets with my community, and I’m also not a citizen. I wanted to find a way to participate in a realm I understood.”

Black Trans Lives Thrive presents an accessible option for those looking to participate in the Black Trans liberation movement: Every quarter members vote on a different Black Trans-led organization to support as their grantee partner. Members each give $25 per month, and the total amount raised is donated to the organization, which amounts to three months of financial support. Members also spread awareness about grantee partners through their own channels -- increasing visibility during a critical time for grassroots fundraising.

The giving circle chose their first grantee partner, SWOP Bronx, the Bronx branch of the Sex Workers Outreach Project, based on the immediate need for action in New York’s Black Trans community following the outbreak of COVID-19.

SWOP Bronx supports Black Trans sex workers in New York City. As a predominantly in-person profession, sex work was heavily hit by the pandemic and explicitly excluded from all COVID-19 related financial aid provided by the U.S. federal administration. Black Trans Lives Thrive not only offered SWOP Bronx some much-needed financial aid, but it also opened conversations between circle members about the communities they want to support, regardless of whether their own lived experiences match those of their grantee partners.

“The majority of our members are not Black Trans people,” Conway-Taylor explains. “So, by building awareness among [circle members] and bringing more folks into active roles in the movement … we are propelling the urgencies, causes, and needs of Black Trans people into households that maybe don’t ordinarily have these conversations.”

Similarly, the circle’s other grantee partners to date represent a range of communities and lived experiences, linked by a shared commitment to Black Trans liberation. New York-based For The Gworls assists Black Trans folks across the U.S. in affording essential services like healthcare, rent, and safe, affirmative surgeries. The Okra Project, also operating nationally from New York, brings, “home-cooked, healthy, and culturally specific meals, and resources” to Black Trans communities within the city’s five boroughs and beyond.

Black Trans Lives Thrive now also partners with organizations outside of New York like New Orleans-based House of Tulip, a nonprofit organization committed to restoring multi-family properties, turning them into affordable housing, with access to healthcare and employment opportunities, for Trans and gender non-conforming (TGNC) people.

This is just the beginning of the Black Trans Lives Thrive story. Hosted on Grapevine, a technology platform for collective giving, members can participate virtually from all over the U.S. (and the world -- Conway-Taylor’s mother contributes to the circle from Australia!). Connections have formed between members while carrying out their giving circle duties -- from simple social media sharing requests to discussions around values, accountability, and community care when vetting potential grantees.

“By spreading those conversations, that will be how we see legislative and cultural change,” Conway-Taylor explains. “It’s one thing to deploy cash into communities, but it’s also imperative that this energetic movement and discourse goes through other routes.”

Since the circle’s founding in June 2020, Black Trans Lives Thrive has seen exponential growth. The circle started with 14 loosely connected friends committed to making a difference together by pooling their individual $25 into $350 each month. In just one year, the circle has grown to more than 170 members across the United States. In May 2021, Black Trans Lives Thrive crossed the $20,000 total donations threshold, a milestone that inspired exciting possibilities for the future.

“It took me a minute to think way down the line,” Conway-Taylor admits. “But in Q1 of this year I set goals: How many active members will equate to $10,000 a month? (The answer is 400!) That’s a significant amount of money, and to send that repeatedly over three months is well beyond the overheads we originally set out to cover for our grantees.”

Eventually, the goal is for Black Trans Lives Thrive to be a major funding source for larger projects, team member stipends, emergency funds, and other quick-moving capital for the grassroots organizations they support. By taking some fundraising efforts off of activists’ to-do lists, Black Trans leaders will have more space to focus on their mission.

“We exist so Black Trans-led organizations can devote more of their time to improving lives and building thriving communities,” says Conway-Taylor.

As for the future? With just 280 additional members, Black Trans Lives Thrive would hit their goal of providing $10,000 in funding every month.

At that point, says Conway-Taylor “We would be unstoppable.”

Philanthropy Together aims to strengthen and scale the giving circle movement by working with giving circles like Black Trans Lives Thrive. Learn more at philanthropytogether.org. 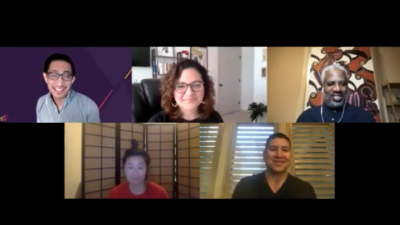 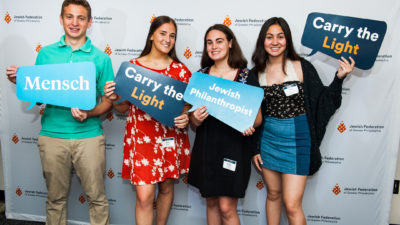 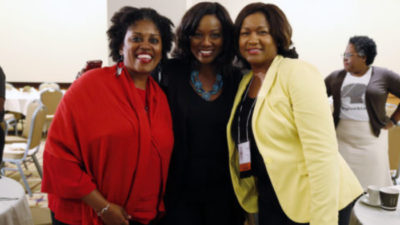