The Bhopal Disaster Isn’t Over 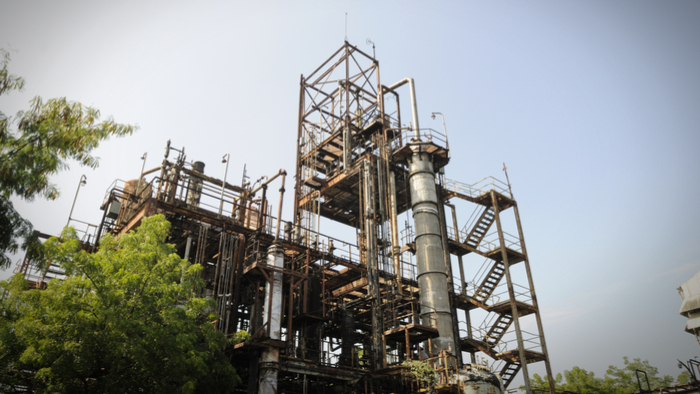 • Apoorva Mandavilli explains that because no cleanup effort was ever implemented, the environmental impacts of the Bhopal disaster – a major toxic gas leak in 1984 – are still being felt.

• How can philanthropy help to clean up industrial disasters like this one? How can disasters be averted through regulations?

• Find out how the people of the Amazon are fighting against big oil.

In old Bhopal, not far from the small Indian city’s glitzy new shops and gorgeous lakes, is the abandoned Union Carbide factory. Here, in one ramshackle building, are hundreds of broken brown bottles crusted with the white residue of unknown chemicals. Below the corroding skeleton of another, drops of mercury glitter in the sun. In the far corner of the site is the company’s toxic-waste dump, shrouded in a sickly green moss.

Not 15 feet away, a scrawny boy of about 6 tries to join a game of cricket. A few skinny cows graze next to a large, murky puddle. Strewn on the ground are torn plastic bags, yellowed newspapers, stained paper cups. And in the air, the pungent fumes of chlorinated hydrocarbons.

On December 3, 1984, 40 tons of a toxic gas spewed from the factory and scorched the throats, eyes, and lives of thousands of people outside these walls. It was—still is—the world’s deadliest industrial disaster. For a brief time, the Bhopal gas tragedy, as it became known, raised urgent questions about how multinational companies and governments should respond when the unthinkable happens. But it didn’t take long for the world’s attention to shift, beginning with the Chernobyl nuclear accident a little more than a year later.

In the decades since, many other sites of industrial waste—in New Jersey, Missouri, Ohio—have been cleaned up. But this 70-acre site in Bhopal has, apart from the riotous jungle basil, remained mostly unchanged. Union Carbide Corporation (UCC); its former Indian subsidiary; its current owner, DowDuPont; the state government of Madhya Pradesh; and the central Indian government have all played an endless game of pass the buck. While this charade plays on, and people continue to think of Bhopal’s tragedy as one horrific night in 1984, the site still hosts hundreds of tons of contaminated waste. The Bhopal disaster is, in fact, still unfolding.

Read the full article about the Bhopal disaster by Apoorva Mandavilli at The Atlantic.