A Refugee Camp Grows on the US-Mexico Border 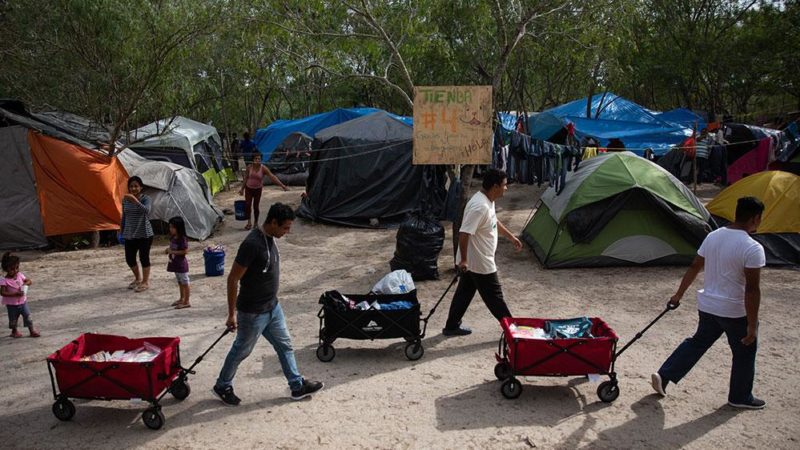 · Al Jazeera Media Network takes a look at the growing refugee camp in Matamoros, Mexico, which is full of individuals seeking asylum in the US.

· How long do refuges typically wait for their cases to be heard?  What can be done to help speed up the process?

· Check out this article about how to help migrants at the border.

Preparing for lunch hour, Maria* adds firewood to her wide mud stove shaded by a tarp shelter amid hundreds of similar structures home to asylum seekers like her, waiting for months in this camp with hopes to cross the border, just a few paces away, into the United States.

Maria, 38, serves grilled meat, rice, salad and tortillas for lunch to some of her neighbours encamped on the bank of the Rio Grande in Matamoros, Mexico, just across from Brownsville, Texas.

Dozens of other cooking fires like Maria’s burn throughout the camp all day. Hundreds of mismatched camping tents cluster between the scraggly mesquite trees, picked clean for firewood. Families without tents sleep under plastic tarps hoisted over branches and tied to wooden stakes in the mud.

Maria eventually came here from El Salvador with her husband and nine-year-old son, with hopes of filing their asylum claims then moving on to join family in the US like many other Salvadorans who had come before. But when they arrived, the door had been shut.

Now, almost six months later, the American flag waves to Maria from behind a razor-wire fence, just across the river from where she does laundry. At this point, she says, all she can do is to keep waiting with hope.

“We have faith in God that the law will change and they will let all these people in,” Maria says, shielding smoke from her eyes as people stroll along the broad dirt pathway through the tents outside her stall. “That’s why we keep waiting here.”

Read the full article about refugees at the US-Mexico border by Dylan Baddour at Al Jazeera Media Network.