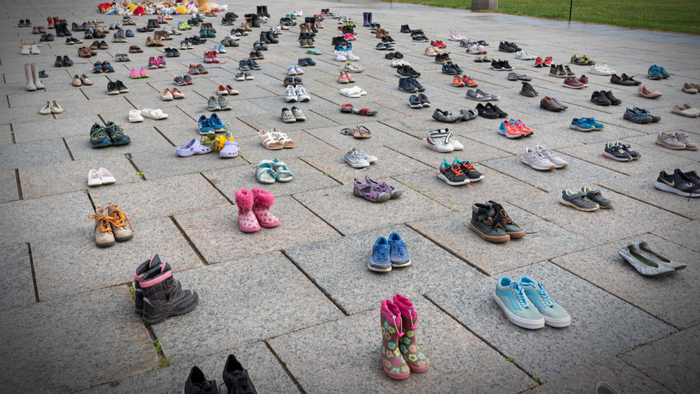 As many people in this country prepare to gather with loved ones and give thanks, some even continuing to pass down the story through generations, we stare squarely at an embarrassing and painful truth: the story of Thanksgiving is a lie, deliberately crafted and told from a specific perspective that has whitewashed the history of and mistreatment of American Indians and Alaska Natives from our national narrative.

Earlier this year, in May, reports revealed the devastating news about human remains found at residential schools for Native children all over Canada. And beginning about 1869 – more than a century and a half ago – in the United States, but as recently as the 1960s, Native children were forcibly taken from their families and placed in government-funded and/or church-run boarding/residential schools thousands of miles away from their families and communities – all to make them forget their Native culture through forced assimilation into Euro-American culture.

Nothing can make up for the physical, psychological, and spiritual violence and damage that has been done to tribal nations – not renaming Columbus Day National Indigenous Day, not busting the Thanksgiving myth. But a step was taken recently to begin to address the harm done to Native children when U.S. Senator Elizabeth Warren and U.S. Representative Sharice Davids introduced the Trust and Healing Commission on Indian Boarding School Policies Act.

As we celebrate Native American Heritage Month in November and the rich and diverse cultures, traditions, histories, and important contributions of Native people, we reached out to Dr. Sarah Kastelic (Alutiiq), executive director of the National Indian Child Welfare Association and Independent Sector Board Vice Chair, about the Act and what it aspires to do.

If you are looking for opportunities to learn and connect with others interested in the topic of Indigenous Communities, take a look at these events, galas, conferences and volunteering opportunities aggregated by Giving Compass.

If you are interested in Indigenous Communities, please see these relevant Issue Funds, Charitable Organizations or Projects where you can get involved.