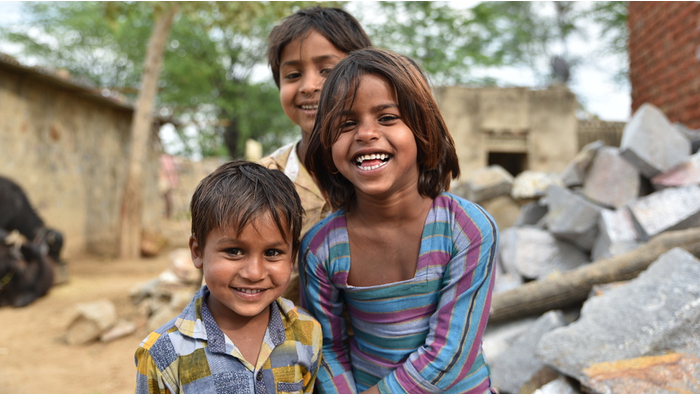 • How can funders use this information to guide efforts to strengthen education in India?

• Read about four methods for effectively funding education in India.

Over the last 15 years, the Annual Status of Education Reports are well known for data on basic reading and arithmetic levels for children in the elementary school age group. What is less known is that in ASER there is rich data over time about the educational status of children below the age of six. While the nation-wide ASER 2018 report has data on enrollment patterns in age group four to eight, the recently released ASER 2019 report is completely focussed on exploring more deeply where young children are and what they can do.

Looking at these data, three clear trends are visible.

First, there is considerable scope for expanding anganwadi outreach for three and four year-old children. All-India data from 2018 shows that slightly less than 30 percent children at age three and 15.6 percent of children at age four are not enrolled anywhere. But these figures are much higher in states like Rajasthan, Uttar Pradesh and Bihar. Expanding access to anganwadis is an important incremental step. Strengthening the early childhood components in the ICDS system would help greatly in raising school readiness among young children.

Second, it is commonly assumed that children enter Standard I at age six and that they proceed year by year from Std I to Std VIII, reaching the end of elementary school by age 14. The Right to Education (RTE) Act also refers to free and compulsory education for the age group six to 14. However, the practice on the ground is quite different. ASER 2018 data show that 27.6 percent of all children in Std I are under age six.

Third, there are important age implications for children’s learning. Data from ASER 2019 (26 rural districts) indicate that in Std I, the ability to do cognitive activities among seven-eight year olds can be 20 percentage points higher than their friends who are five years old but in the same class. In terms of reading levels in Std I, 37.1 percent children who are under six can recognise letters whereas 76 percent of those who are seven or eight can do the same. Interestingly, age distribution in Std I varies considerably between government and private schools, with private schools in many states having a relatively older age distribution. A big part of the differences in learning levels between government and private school children may be due to these differences in age composition right from the beginning of formal schooling.