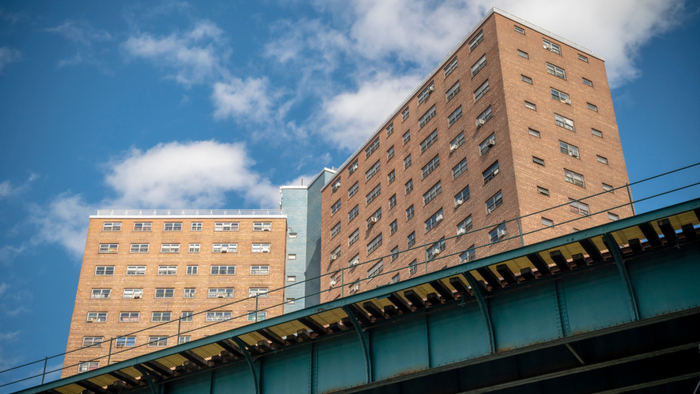 It is well-documented that some of the most polluted environments in America are where people of color live, work, play, and pray. Environmental racism increases pollution levels not only in the outdoor environment but in the indoors as well. Low-income and public housing residents are disproportionately exposed to poor living conditions which can subsequently affect their health. Residents in Northern Manhattan continue to suffer from asthma, lead-poisoning, and cancer at elevated rates compared to those in more affluent areas of the City. This is especially true for the tens of thousands of Uptown residents living in public housing developments. According to 2018 data, Northern Manhattan’s population is 51% Latinx, 27% Black, 15% White, 4% Asian, and 3% Other.

In New York City, nearly 600,000 New Yorkers live in NYCHA affordable housing developments. Established in 1934, the New York City Housing Authority (NYCHA) was the first and is currently the largest public housing authority in the United States, with 326 developments across the five boroughs of New York City. The four northern Manhattan neighborhoods, East Harlem, West Harlem, Central Harlem, and Washington Heights have higher rates of voucher and public housing apartments than the city as a whole.

While NYCHA has been able to house an unprecedented number of residents, it faces a myriad of problems – most of which are tied to the fact that it has been chronically underfunded for years. As a result, the New Yorkers who rent apartments in NYCHA developments often have to endure environmental challenges such as mold, lead, and pests along with substandard service in terms of repairs and other basic issues. Maintenance issues such as broken elevators and boilers, impaired surveillance cameras and intercoms, and other maintenance issues significantly impacts residents’ daily activities, and can also severely impact health. Broken elevators can cause older residents to stay isolated in their units, or can trigger respiratory illness on a hot day from overexertion.

In addition to the lack of proper maintenance in NYCHA buildings, NYCHA units are also equipped with gas stoves and fossil-fuel powered boilers, which increase residents’ exposure to air pollution. Gas stoves produce as much as 400% higher nitrogen dioxide concentrations in homes than electric stoves do, and living in a home with a gas stove can increase a child’s risk of having asthma by 42%.

According to the U.S. Environmental Protection Agency, we spend approximately 90 percent of our lives indoors. That’s why the indoor environmental threats and other challenges that NYCHA tenants face are such a grave concern.

Given that most of NYCHA’s problems stem from a lack of funding, one clear solution to these issues is to secure more city, state, and federal funding to go towards affordable housing. WE ACT believes that it is important that NYCHA residents’ concerns be brought to the attention of City Council Members and City Agencies to ensure that city budgeting takes their needs into account, and that City elected officials and NYCHA administration members advocate for solutions to NYCHA that preserve our city’s vital affordable housing stock. WE ACT is driving a voter engagement campaign in Northern Manhattan to mobilize NYCHA residents and advance a NYCHA-focused policy agenda during the June 2021 primaries and November elections.

WE ACT for Environmental Justice and its partners are also currently working on a statewide campaign, Better Buildings NY, that will help transition homes and buildings off of natural gas and other fossil fuels in favor of electricity from renewable energy sources. Two of the most common uses of fossil fuels in homes and buildings is cooking and heating. We are implementing a pilot program in 20 NYCHA residences to replace gas stoves with electric induction stoves and similarly replace boilers powered by fossil fuels with electric air-source heat pumps. This will ideally result in improved indoor air quality for NYCHA residents, subsequently reducing asthma and other breathing-related health issues.

Some ways to get involved:

Original contribution by Corina Fuentes, Development Writer at WE ACT for Environmental Justice.