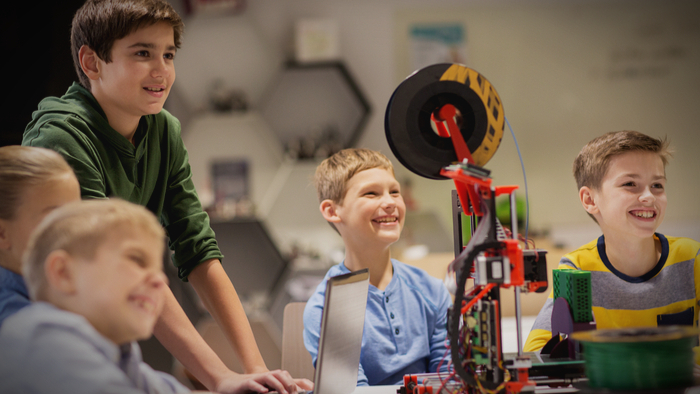 • FIRST is an after school program that launched 30 years ago for STEM education and is now inspiring over 50,000 students and has since started adding programs teaching robotics in schools across the country.

• How can other after school programs emulate the model that FIRST has to be just as successful?  COVID-19 has complicated in-person after-school programs like this one. How can funders help to build successful programs given the constraints of COVID-19?

• Read about the success of Tennessee’s new strategy to build a culture around STEM education.

When FIRST originally launched 30 years ago as an after-school robotics activity for high schoolers, the STEM movement was a nascent affair and such concepts as “makerspaces” and “hands-on experiential learning” had yet to fully take root.

But as these movements found traction, FIRST has been there to add even more wind to the sails, using focused short-term robotics competitions and electrifying national championships to capture both the imaginations of K-12 students and the interests of instructors.

Fast forward a couple of decades, and the growth of FIRST (For Inspiration and Recognition of Science and Technology) shows no signs of slowing down, as one annual world championship has now expanded into two, playing out in different cities on different weekends to attract the world’s top STEM students.

The sheer statistics are staggering: From 61,000 teams across 85 countries, more than 530,000 students commit to the two-month endeavor, building 120-pound robots that can complete an array of core tasks.

FIRST can bring schoolyard glory to the winners, but you’ll find most FIRST teams meeting outside of conventional school hours, typically preparing for afterschool competitions. That said, two-thirds of FIRST teams in the United States are linked to their schools, often with teachers as coaches and local industry professionals as mentors.

FIRST officials say the organization is now aiming to strengthen this bridge to the classroom through a simplified robotics experience for classroom teachers.

Beyond STEM coursework, though, FIRST organizers say they see their mission as something broader: inspiring a lifelong love of learning, which will surely prove critical in today’s ever-evolving workforce. The robots, and the core STEM concepts, they say, are merely the competitive hook to entice students to think more critically about how to improve the world around them.

Read the full article about STEM programs by Tim Newcomb at The 74.

Youth Development is an important topic. Other members found these Giving Funds, Charitable Organizations and Projects aggregated by Giving Compass to be relevant to individuals with a passion for Youth Development.