Illuminating the Women Leading the Charge at Standing Rock 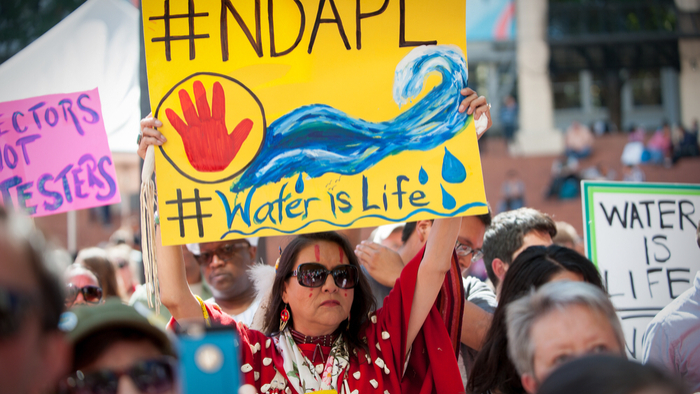 Documentary filmmaker Shannon Kring first heard about the protests at Standing Rock while she was living and working in Honduras. Her parents, back in Wisconsin, sent her a link to Amy Goodman’s coverage on Democracy Now! Kring was struck by the “gross abuses of power” and unfettered violence police were inflicting on unarmed water protectors. “I needed to do what I could to help get the story out there, because it was clear to me that it was being ignored by the mainstream publications and broadcasters,” Kring recalls.

“It became clear to me after the first day of filming that it needed to be a story about the women,” Kring says. “Women were really the backbone of the entire operation.”

In the resulting film, End of the Line: The Women of Standing Rock, Kring’s co-producer Pearl Daniel-Means says: “Every day, we have 10, 12 other nations coming in to stand in solidarity with us. And we’re showing the world who we are, in a nonviolent manner. That’s all we’ve ever wanted, is to be respected, left alone. A nation isn’t defeated until the hearts of the women are on the ground.”

So the women of Standing Rock fought on. And in the process, they inspired the world. Kring spoke of Indigenous women with whom she’d collaborated in Honduras and Scandinavia, who told her that Standing Rock changed what seemed possible.

“It gave them this boost of confidence, like ‘They can do it. We could do it too,’” Kring says.

That commitment and invincibility pulses through the film as women at Standing Rock describe their motivations and experiences at the camp, and, importantly, their hopes for maintaining that solidarity and that energy into the future.