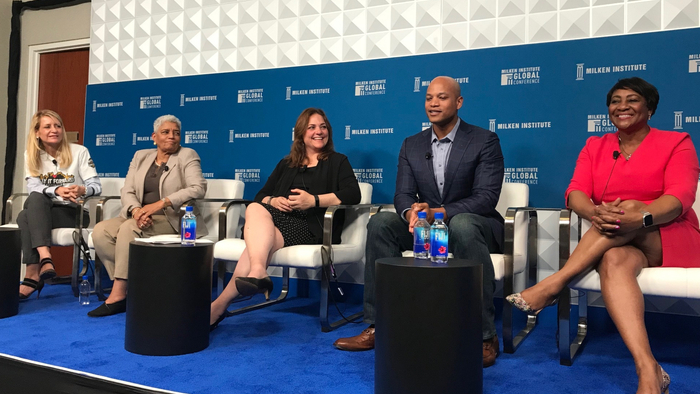 Philanthropy is at a crossroads, looking inward and re-examining its role in fostering uneven power dynamics and perpetuating inequity. In an effort to level the playing field and give communities a stronger voice, many are taking a new look at place-based philanthropy.

“Place-based is proactive, not reactive,” said Buhl Foundation President Diana Bucco at the recent 2019 Milken Institute Global Conference. “We’re not waiting for people to come to us. It’s anchored in assets. Assets are defined first as people, second as places and the last are resources … It will lead to the redistribution of resources that will result in systemic change.”

Place-based work begins with a realization that while money is important, people and place often matter much more. Despite billions of dollars being poured into solving big issues — homelessness, unemployment and health outcomes, to name a few — these problems persist largely because of ingrained structures and policies, including the gender pay gap and discriminatory housing policies.

Tackling these problems from the top-down can feel like trying to empty a pool in a rainstorm. Starting from the bottom up and putting place first can be a useful alternative. “Place” can mean virtually anything — a small neighborhood or a large urban area or anywhere in between. Like the top-down, billions-of-dollars approach, place-based work also aims to tackle complex issues, including poverty. But it does so through more targeted, localized systems change, and provides measurable parameters that can help illuminate complex problems.

Wes Moore, CEO of Robin Hood in New York City, says throwing money and power around won’t change deep-seated histories and structures. But a place-based model will drive you closer to answers.

“People who are closest to the challenge are also going to be closest to the solutions,” Moore said. “Our job is not to help to save people, our job is to help move barriers that have been constructed in front of people.”

Measurable, local data is important, but it can’t be the only focus. Communities may be wary of new faces claiming they can solve long-standing local problems, especially if those communities have a history of being abandoned by philanthropy. And if donors are unaware of community history and dynamics, they can also unknowingly generate or exacerbate tension between various local parties. Therefore, humility and trust-building are paramount. Setting up an office in the community, partnering with local stakeholders who can bring their knowledge and expertise, and making an honest and transparent long-term commitment to an area all go a long way.

Philanthropy can also be a bridge between different ideologies and approaches. When the Jackson, Miss., school district was at risk of being taken over by the state (a common practice for failing schools in the state), local residents said they wanted a new solution.

But the foundation didn’t just play mediator and then leave. It has made commitments to staying in communities for “a generation” — while consciously not defining how long that is. Patience is key to place-based philanthropy, and measuring impact over a long period of time can be difficult. To be effective, it’s important to identify leading indicators, track them and build momentum over time.

Place-based philanthropy also gives donors an opportunity to go big or go home. When no one else is willing to take a chance on a community, philanthropy can be catalytic. Robin Hood was an early investor in needle exchanges in New York City, at a time when no one wanted to tackle the issue — even though data showed it could help reduce the spread of HIV/AIDS.

Today, Robin Hood no longer funds the project. The federal government does.

“We can invest in things early, prove that it works, de-risk it, and then present it to partners who can say ‘now it’s our job to take it over,’” Moore said.

Place-based for the Individual Donor

Although individual donors lack the staff and capacity of a large foundation, a place-based approach can still work if you’re strategic, collaborative and skilled at leveraging your resources. It also helps to start in a community where you have close-knit ties.

In 2016, philanthropist and Pittsburgh-native Cindy Citrone and her family launched Play it Forward Pittsburgh to bring awareness to organ donation after Citrone’s father-in-law was diagnosed with end-stage renal disease. As they navigated his illness they learned that despite being home to some of the top transplant facilities in the world, fewer than half of Pittsburgh residents were registered organ donors.

To address the shortage of organs in the region, the Citrones worked with the Milken Institute’s Center for Strategic Philanthropy and decided to leverage their deep connections to their beloved community to generate momentum and reach a wider audience. Their goals were to register every eligible resident as an organ donor, raise funds to support leading organizations in transplant excellence, and educate the public on these issues. As part owners of the Pittsburgh Steelers and major investors in the Pittsburgh Penguins Foundation they succeeded in getting both teams to partner in publicizing the campaign. Then the Pittsburgh Pirates joined in, along with the city’s universities and other local organizations.

But, successful place-based philanthropy doesn’t require a stake in the local sports team. Citrone’s example shows that creativity and inclusiveness is key. Today, the Citrones are focused on a new campaign in the city for mental wellbeing. They’ve created an “a la carte menu” of ways for community members to get involved, from the local coffee shop proprietor to mental health researchers.

“We’re looking at every single partner in the city … we want everyone to contribute and everyone to benefit,” Citrone said.

Place-based philanthropy isn’t formulaic – there’s no one right answer for every community – but the through line for success is humility and a willingness to collaborate.