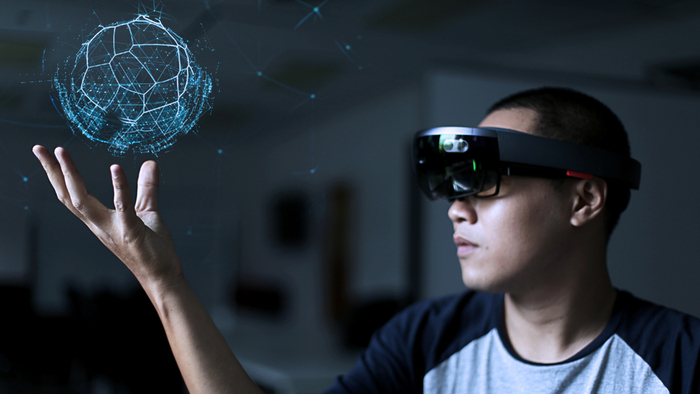 • Sri Peruvemba reports on a new microdisplay platform that will likely change the way we communicate and even react and behave toward one another.

• What is the downside to this? How can donors and funders help ensure that this technology is heading in the right direction?

Forget laptops, tablets, phones or smartwatches. Say goodbye to keyboards and mice, and say hello to a bold new breed of wearables that will interpret eye blinks, voice commands and hand gestures. A tiny camera will follow your fingertips and body movements, letting you move images and text around like those depicted in Ready Player One. We may even go farther than the virtual reality (VR) depicted in The Matrix.

The AR/VR hype is over. As a board member and chair of marketing for the Society for Information Display (SID), I’ve witnessed several serious players develop useful apps over the past year that make these devices valuable.

We are at the tip of the iceberg in terms of market potential. Augmented reality (AR) and VR headsets will grow leaps and bounds in the next decade. We’ve already seen major breakthroughs in size, weight and performance. Microdisplays, optical engines and haptic feedback gloves will be key drivers in this arena.

Innovative new headsets revealed at CES and other venues have sparked interest in “super-smart” eyewear. These wearable computers will offer eye-opening functionalities, allowing the wearer to interact with smartphones, health-tracking options and many other features. The new devices will be supported by a growing ecosystem of components.

Read the full article about new microdisplays for next-generation computing by Sri Peruvemba at Forbes.

Interested in learning more about Tech for Good? Other readers at Giving Compass found the following articles helpful for impact giving related to Tech for Good.