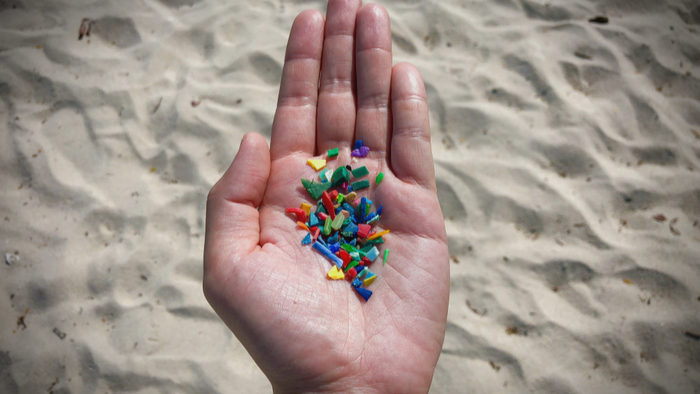 • A study in Nature Geoscience (along with other reports) suggests that microplastics are being aerially transported, and have become a global issue, not just region-specific.

• What are donors doing to address the issue of microplastic pollution?

•  Read about how microplastics are infiltrating our food system.

When I started my garden last year, I was excited to start digging into the soil at my new home, to pull weeds and plant tomatoes, cucumbers, and peppers. What I wasn’t ready for was what I found in the soil in my backyard: bits of glass, old newspapers, and plastic. Lots of plastic. I cleaned it up as well as I could but I had to wonder what I would really end up eating when I ate my “garden fresh” veggies.

Since plastics became a ubiquitous part of life, they have pervasively made their way into every corner of the globe. For decades, reports of macro- and microplastic pollution in the ocean have been making headlines; pictures of strangled dolphins and sea turtles, albatrosses with stomachs full of plastic, and the infamous Pacific garbage patch that’s roughly the size of Texas have captured the public’s attention.

A new study in Nature Geoscience found that microplastics were present in a remote, high-altitude lake in the Pyrenees mountains (southern France), far from congested city centers that are thought to be the source for plastics pollution.

This isn’t the first time microplastics have been found in otherwise “pristine” natural environments; they’ve also been found in remote lakes in Italy and Mongolia, in floodplain soils in a Swiss nature reserve, and in melting Arctic sea ice. The conclusion is clear: Microplastics are being transported through the air, making them a global problem, not a regional pollutant.

The knowledge that microplastics can be aerially transported like dust or pollen and deposited in any environment all over the world has implications for freshwater systems, soil ecology, and human health—to name a few.

Read the full article about microplastic pollution by Rebecca Dzombak at Pacific Standard.

Learning and benchmarking are key steps towards becoming an impact giver. If you are interested in giving with impact on Environment take a look at these selections from Giving Compass.

If you are looking for opportunities to take action and give money to Environment, here are some Giving Funds, Charitable Organizations and Projects aggregated by Giving Compass where you can take immediate action.