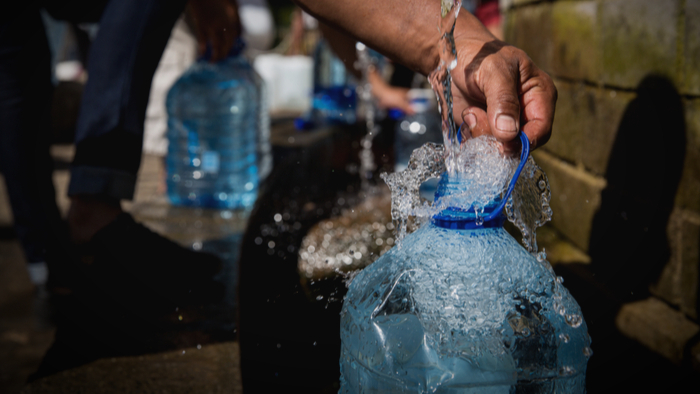 • A paper commissioned by the High Level Panel for a Sustainable Ocean Economy suggests that addressing local drinking water supplies and eliminating water bottles might help curb plastic pollution in the ocean.

• How can local governments, stakeholders, and donors support this recommendation?

• Learn about the other avenues for tackling plastic pollution.

If people don’t have to buy drinking water in bottles, a huge quantity of plastic waste will be diverted. The problem of plastic pollution pouring into the world’s oceans is a big and daunting one, for which countless solutions have been offered. Improve collection services! Build better recycling facilities! Force companies to redesign single-use packaging! Tell people not to buy it! The advice goes on and on.

All of these suggestions are important and play a part in reducing ocean plastic pollution, but there is one idea that could make a bigger dent than the rest: Fix local drinking water supplies and eliminate the need to buy single-use plastic water bottles. This could be the most effective way to reduce households’ plastic waste, particularly in developing countries.

This recommendation was made by the authors of a new blue paper that examined strategies for addressing plastic pollution “in the context of an already stressed ocean.” It was commissioned by the High Level Panel for a Sustainable Ocean Economy, which has representatives from 14 countries that support the UN’s sustainable development goals.

It addresses a problem that’s different from what we have in North America, where many people have a habit of drinking bottled water, even though the water in their taps is perfectly fine. These people can sometimes be convinced to change their ways, and the public narrative around plastic water bottles has certainly shifted in recent years, shrouding it in stigma. But for people in other parts of the world, who cannot ever drink the water out of their taps, plastic plays a major role. That’s where governments need to step in.

Read the full article about plastic pollution by Katherine Martinko at TreeHugger.